Guidelines for Withdrawal Rates and Portfolio Safety During Retirement

A lot of retirement withdrawal rate studies are very repetitive and do not really offer anything new.  There are many variations of the Trinity study, which looks at success rates (or the corresponding failure rates in the case of today’s article) of various withdrawal rate and asset allocation strategies. At first, I thought it might be the case for this article too.

However, as I read it again, I realized that this article offers a very nice graphical way of presenting its results. So nice, in fact, that prospective retirees would be better off looking at the figures of this study than at the tables of the Trinity study when doing traditional retirement planning. The graphical presentation of the results do provide some insights about withdrawal rates and asset allocations in a very straightforward and easy to understand way.

The study does look only at 30 year periods, and it assumes end of year withdrawals.  It uses bootstrapping for annual returns from SBBI since 1926. The two asset classes are the S&P 500 and intermediate-term government bonds.  With any kind of simulations based on past historical data, the study assumes that future market returns will behave with similar patterns as in the past. As a side note, my article “Retirement Withdrawal Rates and Portfolio Success Rates: What Can the Historical Record Teach Us?” summarizes my concerns about that.

The key point of this article is that we can’t just talk about a one-size-fits-all withdrawal rate or asset allocation for all retirees.  The appropriate withdrawal rates (assuming the retiree would like to withdraw at least this much) and asset allocation depend on the probability of failure that a retiree is willing to accept. It also depends on what kind of estate the retiree wishes to leave behind.

The information about failure probabilities, withdrawal rates, and asset allocation is summarized very nicely in their Figure 1.

I’ve replicated that figure below using 1000 Monte Carlo simulations for each strategy based on the annual SBBI data (1926-2010) for the same assets and assuming beginning-of-year withdrawals for inflation-adjusted withdrawals over a 30-year period. No taxes or fees are deducted. 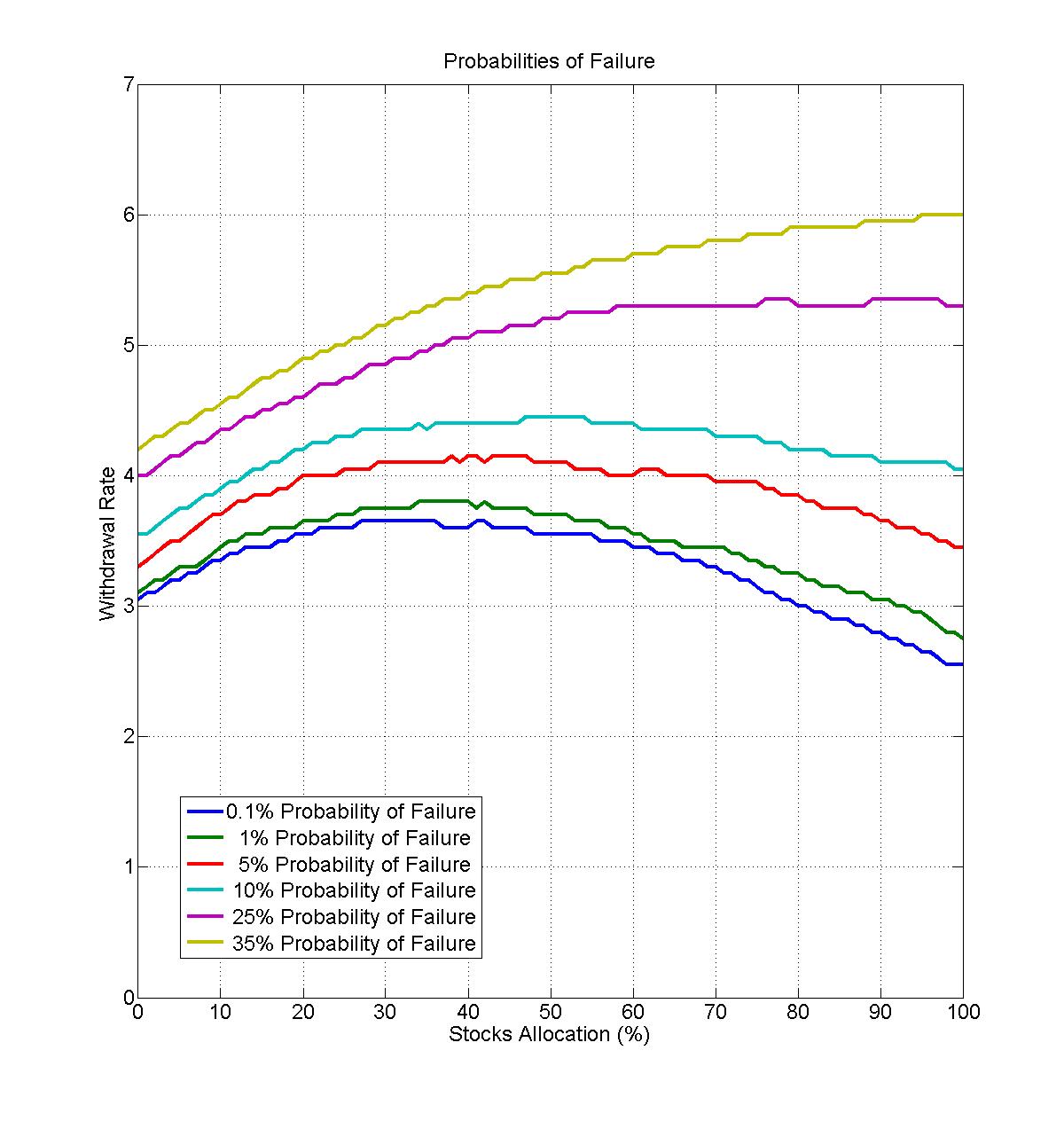 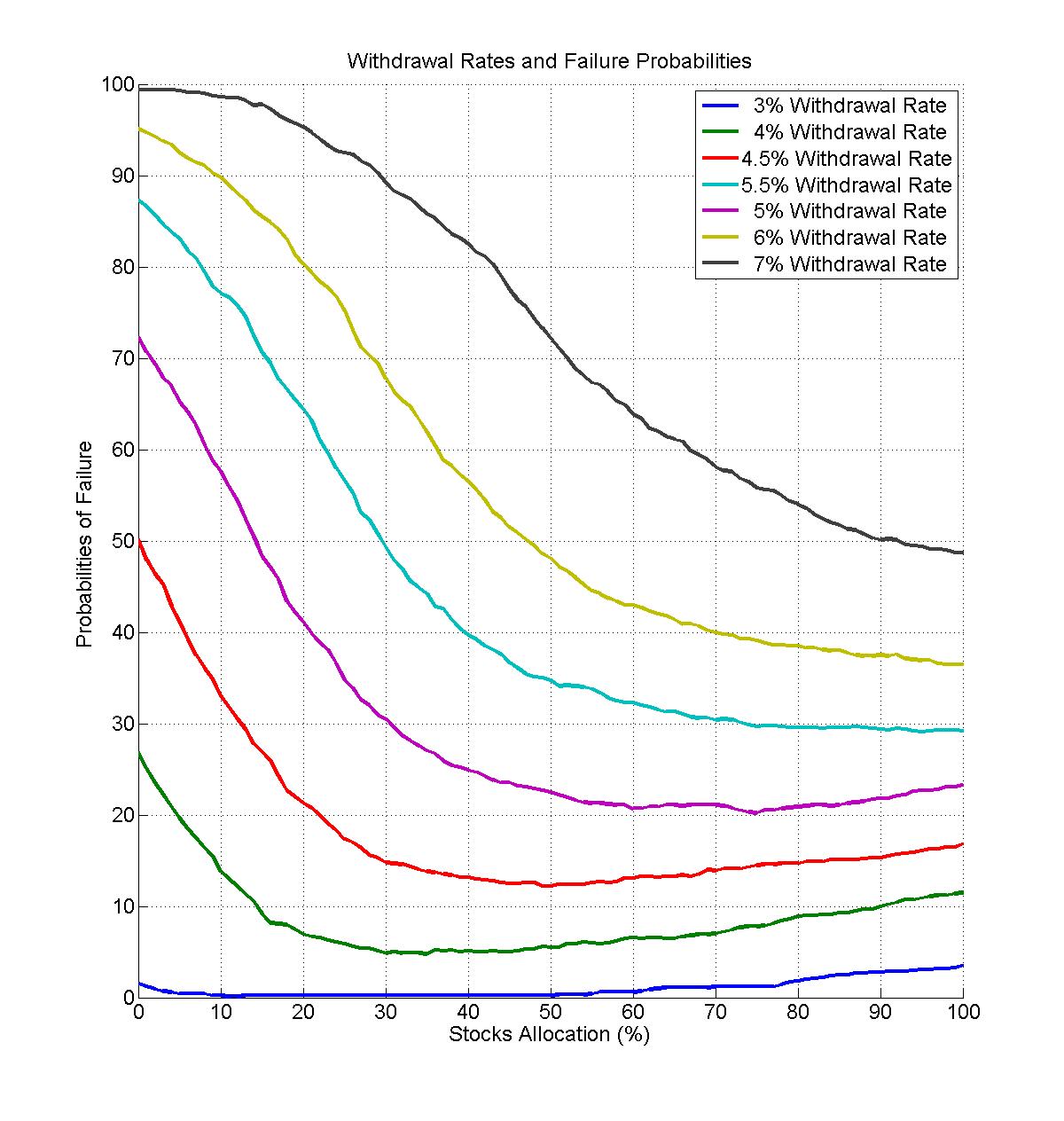 Finally, I’ve modified their Figure 3 to show the median real wealth remaining after 30 years for different withdrawal rates and asset allocations. Their Figure 3 shows mean remaining wealth, but they explain that a few outliers drive the means upward. With the median, there is a 50% chance to end up with more wealth, and a 50% chance to end with less. Initial starting wealth was $100 and these wealth amounts are in real terms. Whenever wealth ran out before the end of 30 years, the amount entered for this calculation is $0. The $100 line thus preserves the real purchasing power of the initial wealth at retirement.

You can see here that if the aim is to preserve initial wealth in real terms for the median case, a variety of strategies allow this with a trend of increasing withdrawal rates require increasing stock allocations.  However, remember from Figure 1 that these strategies have different failure rates.  Higher withdrawal rates and higher stock allocations will also increase the likelihood of running out of wealth before the end of 30 years. You have to consider these factors together.  And if leaving a specific bequest is particularly important for you, you should not be basing the decision on the median case as shown here.

So there you have it.  Two more points I would like to make are that the results do come out differently when using historical simulations (overlapping periods from the historical data).  I discuss about this in my paper mentioned above, “Retirement Withdrawal Rates and Portfolio Success Rates: What Canthe Historical Record Teach Us?” Here is a figure from that paper which is doing something similar as the second figure above, but uses the Trinity study data to compare the results for a 4% withdrawal rate from the historical simulations with the Trinity study to the results using Monte Carlo simulations based on the same underlying data.  These are success rates now, not failure rates (success rate = 100 – failure rate). My paper explains more about why the historical simulations are too strongly biased against bonds.  People get the idea from the Trinity study that for a 4% withdrawal rate, the best stock allocation is 75%.  That is not really the case. 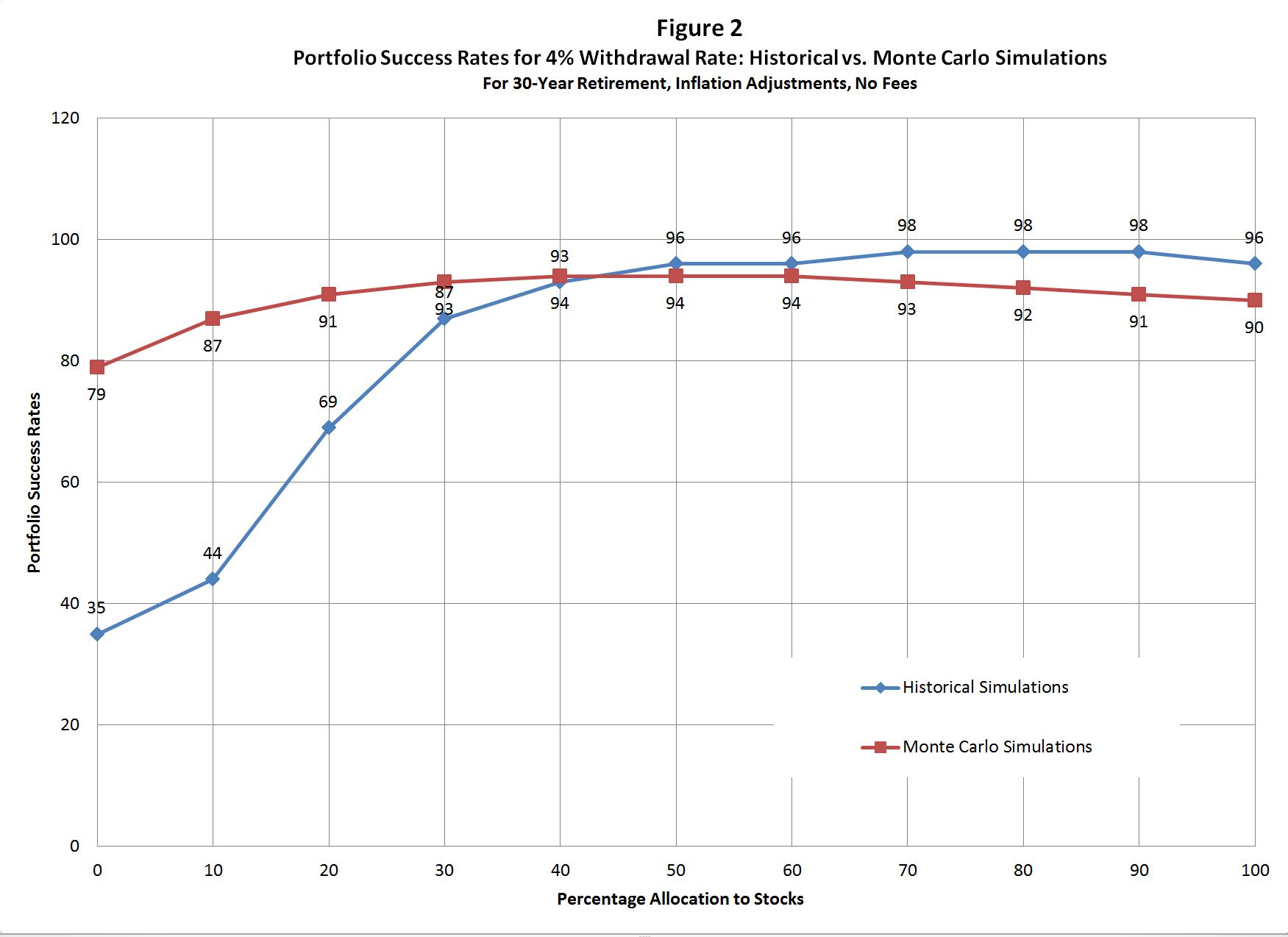 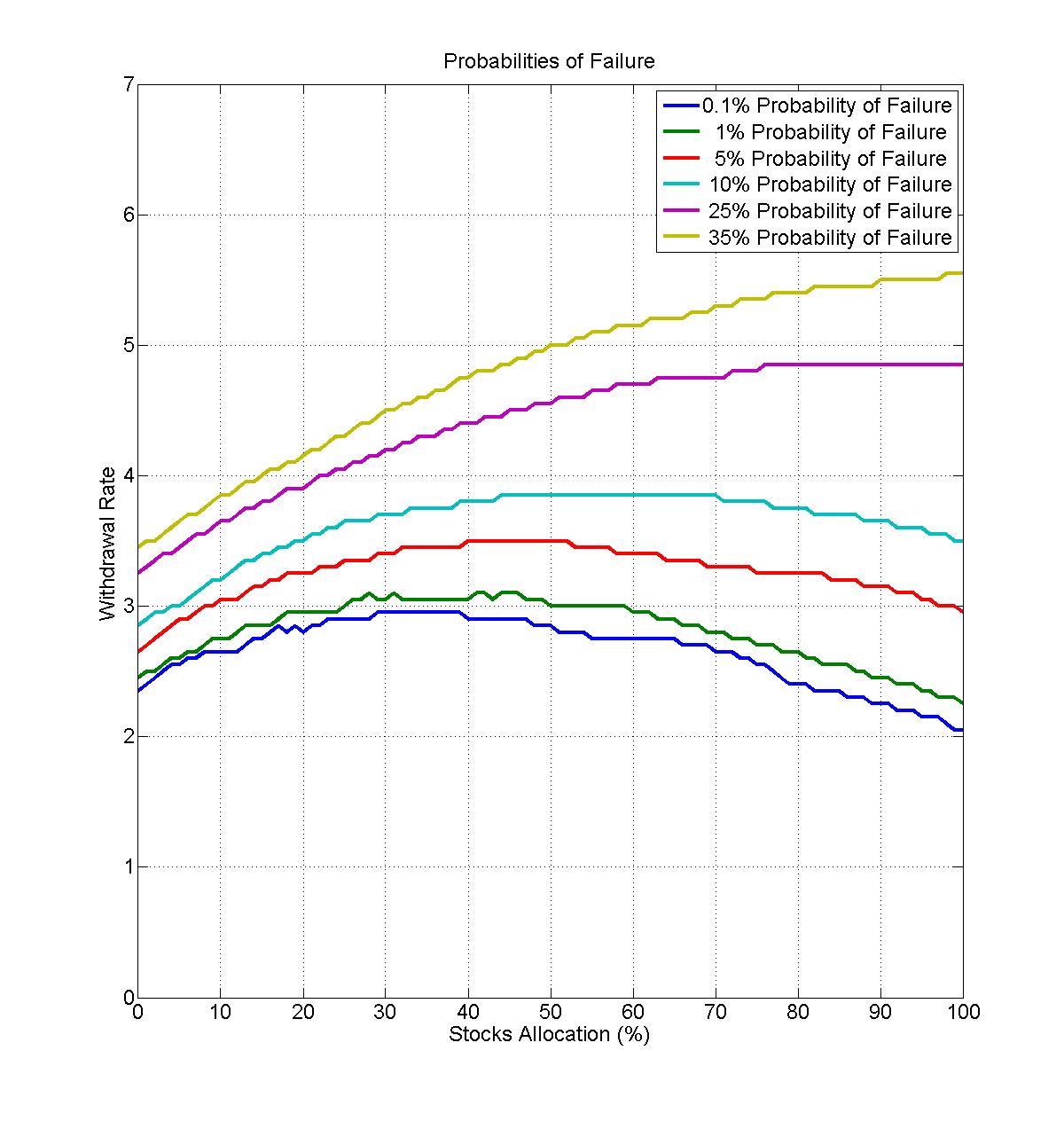