How Likely Is It That You’ll Live Past 80?

The second general approach to dealing with the question of longevity and sustainable spending is to leave the concept of planning horizons behind and simply incorporate survival probabilities into calculations.

Failure is really only failure if wealth is depleted while you are still alive, not just over an arbitrarily long time period. Implications of using mortality data directly include:

The argument for using survival probabilities is that assuming a remaining lifespan of thirty years or longer for a typical person retiring at age sixty-five results in needless underspending.

Dirk Cotton and his co-authors studied these competing risks in a 2016 article called, “Competing Risks: Death and Ruin,” in the Journal of Personal Finance. They found that retirement could generally be divided into three phases:

In other words, for those whose portfolios survive through the middle part of retirement, death becomes a more imminent likelihood than a late-life portfolio depletion.

The American Academy of Actuaries and the Society of Actuaries created the Longevity Illustrator to help users develop personalized estimates for their longevity based on a few questions about age, gender, and health. Exhibit 1 provides these numbers for sixty-five-year-old males and females based on their health assessment and smoking status.

Planning Ages for 65-Year Olds from the Longevity Illustrator 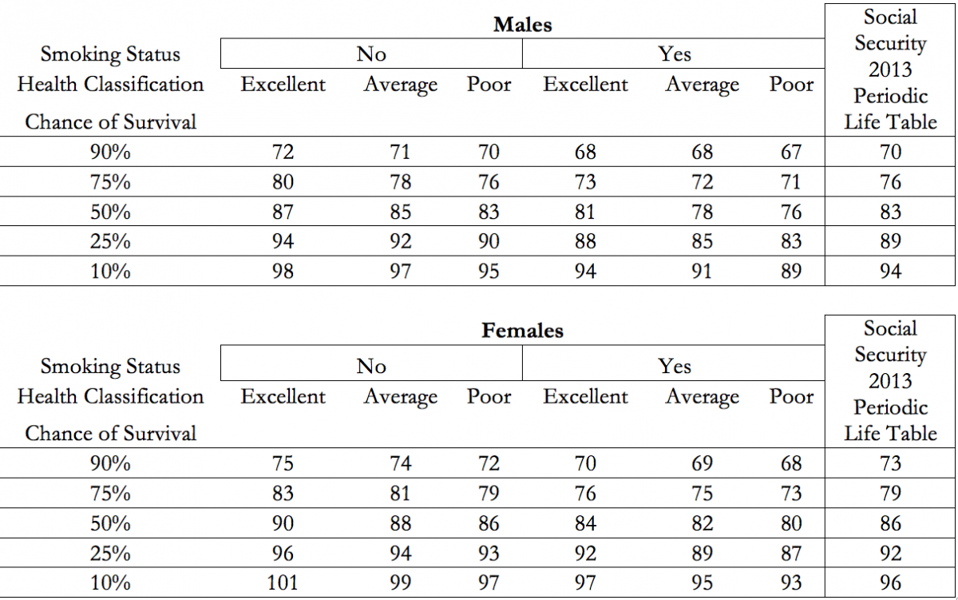 Planning Ages for 65-Year Olds from the Longevity Illustrator

In practical terms, most individuals will probably be best served by using fixed time horizons that are sufficiently conservative to reflect their personal concerns about outliving their wealth. Generally, choosing planning ages for the tenth percentile from the previous exhibit is a reasonable approach for many.

Those who are more concerned about the implications of longevity will wish to assume a longer time horizon and behave more conservatively. This is a more straightforward way to incorporate longevity risk aversion into a retirement income plan. Trying to develop a plan around survival probabilities by age is more complex.

The use of survival probabilities is probably best limited to those working with more mathematical utility models to analyze retirement spending decisions. But the complexities of such models mean their insights are best used to describe potential caveats or adjustments for the conclusions derived from the more straightforward approach of using a fixed planning age.

When using survival probabilities, the risk of a long life is mitigated by planning to reduce spending with age to account for the reduced likelihood of living beyond a certain age.