Should I Contribute to a Roth IRA or a Traditional IRA?

Especially with the growth of Roth 401(k) plans, many retirement savers will confront a decision at the margin about whether to contribute an additional dollar to a Roth account or a tax-deferred account.

At a basic level, the answer to this question relates to whether one is taxed at a higher marginal tax rate now compared to when one will be withdrawing these dollars in retirement. If one’s marginal tax rate is higher now than in retirement, it is beneficial to contribute to the traditional IRA or 401(k), taking the tax break now, in order to pay lower taxes later in life.

However, if the marginal tax rate will be higher in retirement, go ahead and contribute to the Roth account now in order to avoid higher taxes later in life.

By this standard, many young people at the start of their career will have lower salaries and be in lower tax brackets relative to later in life and will benefit from contributing to a Roth. Mid-career individuals at peak earnings will be in higher marginal tax brackets and may see more advantage from a traditional tax-deferred approach.

“Roth IRAs: More Effective (and Popular) Than You Thought”

This isn’t the full story, as a controversial study from T Rowe Price pointed out.  Their conclusion was that “most investors should use Roth IRAs over Traditional IRAs.” They make this case even if marginal tax rates will be lower in retirement. The argument relates to their table on the first page of their study, which considers an individual who saves $1000 in a Roth IRA vs. saving $1000 in a traditional IRA and another $250 in a taxable account. That additional savings is the result of the $250 in reduced taxes created by making a contribution to the traditional IRA when someone is in the 25% tax bracket. Their point is that taxes will have to be paid over time from the taxable account, reducing the power from tax deferral, and that this gives a much greater edge to the Roth.

This point is valid, but I think they’ve really overstated the impact this point has on the final decision.  I haven’t been able to exactly replicate their study, because they are not clear about some of their assumptions, and because I think they have a really odd way to generate retirement income that results in a rapidly growing spending path over retirement. To replicate their study the best I can with what I think are more reasonable retirement spending assumptions, I assume the following:

Roth IRA: Invest $1000 per year until age 65, which grows at 7%. Then for each year of a 30-year retirement, spend a fixed amount each year so that the account balance falls to $0 in year 30, assuming a 6% return. [with a fixed 6% return and withdrawals taken at the start of the year, the sustainable withdrawal rate for 30 years is 6.85%]

Traditional IRA: Invest $1000 per year until age 65, which grows at 7%. Then for each year of a 30-year retirement, spend a fixed amount each year so that the account balance falls to $0 in year 30, assuming a 6% return. The post-retirement tax rate is applied to these withdrawals, reducing the spendable income accordingly. (RMDs are not considered)

In all cases, I assume new contributions are added at the end of the year, and withdrawals are taken at the start of the year.

With these assumptions, I created the following version of their table: 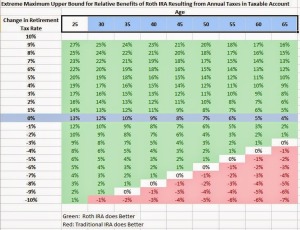 Now, as I note in the table, these are still extreme upper bounds about the relative benefits of the Roth IRA created by the tax issue for the taxable account. Why?

First, the assumed returns are rather high. Based on the fact that someone is saving $1000 every year over a potentially long-career, we’ve got to assume these are compounded real returns, which essentially means that this person is investing in 100% stocks and getting the average historical return (which is about 6.5% since 1926). A more diversified portfolio with a lower stock allocation will lower these returns, and a lower return accordingly reduces the relative benefits of the Roth.

Second, the rather basic assumption about the taxes being applied to the taxable account is not appropriate. It assumes all portfolio growth is taxed each year at the marginal income tax rate.  This ignores the fact that capital gains taxes are deferred until when withdrawals are taken, and that long-term capital gains can be taxed at a lower rate. A more realistic assumption about how taxes will affect the taxable account would lower the taxes being paid each year, and therefore reduce the relative benefits of the Roth.

Third, and this is a matter I want to discuss more in a subsequent post, regards if one is making charitable contributions over time.  Donor-Advised Funds provide a way to contribute appreciated shares from your taxable account, which then basically let’s you reset the cost basis of your account by contributing shares to charity rather than cash, but using that cash to replenish the shares just given away at a new higher cost basis. This reduces the disadvantages of having assets in taxable accounts.

Fourth, the study is completely ignoring the possibility of making Roth conversions at low marginal tax rates in years when income is low. This is a way to get the tax rate paid on those dollars to be much lower than otherwise, making it realistic to assume lower “post-retirement” tax rates to a degree that could make the traditional IRA look quite attractive.

Other Factors Which Favor Roth Accounts


Other Factors Which Favor Tax-Deferred Accounts

When I first read the T Rowe Price study, it got me really thinking about whether I may be making a mistake about how I’m managing my divisions between tax-deferred and Roth accounts. But in the end, I think I’m making the right decision. Tax diversification is important, and so it is good to have some funds in tax-deferred accounts and some in Roth accounts. I don’t think there is a strong reason to shift completely over to the Roth account, to the extent it is even possible. Nonetheless, as my career progresses I will keep this issue in mind more, as there may be a point where a bigger allocation to Roths could make sense.