What Does Spending Look Like In Poor, Great, And Average Retirement Conditions?

With this overview of how the different variable spending strategies performed historically, it is worthwhile to put a bit more effort into understanding the relative performance of these strategies in different market environments.

First, 1966 represents a tough year for retirees, as it triggered the lowest sustainable spending rate of just over 4% for the constant inflation-adjusted strategy. Exhibit 1 provides the path of spending and wealth for each of the ten strategies for the years 1966-1995.

We can observe that the constant inflation-adjusted spending strategy and Michael Kitces’s ratcheting strategy both sustained real spending at the initial $4 throughout the thirty-year horizon. During these years, the ratcheting strategy was never afforded an opportunity to increase spending. With both of these strategies, wealth is on the verge of depletion by the end, and both strategies would deplete assets in year thirty-one of retirement.

The other eight strategies led to reduced spending early on and throughout retirement. For the fixed percentage, moving average endowment formula, and Vanguard’s floor-and-ceiling rule, real spending fell by 50% about fifteen years into retirement.

After this point, the Vanguard strategy kept spending at the lower level as it was difficult for the strategy to reach the wealth triggers needed to allow for subsequent spending increases. This allowed real wealth to grow the most by the end of the retirement horizon, exceeding its initial level in real terms.

As for other strategies, Bengen’s floor and ceiling rule quickly found its way to the hard-dollar floor and did not subsequently increase during retirement. The smoothing endowment formula, Guyton and Klinger’s decision rules, and Zolt’s glide path rule all kept spending and wealth within the middle range of the strategies.

The modified RMD rule is the only strategy to eventually allow for real spending to increase above its initial $4 level. This happened by year twenty-one of retirement, at an assumed age of eighty-six, as withdrawal percentages increased at a fast enough pace to counteract declining wealth.

Performance for All Strategies, 1966 Retiree 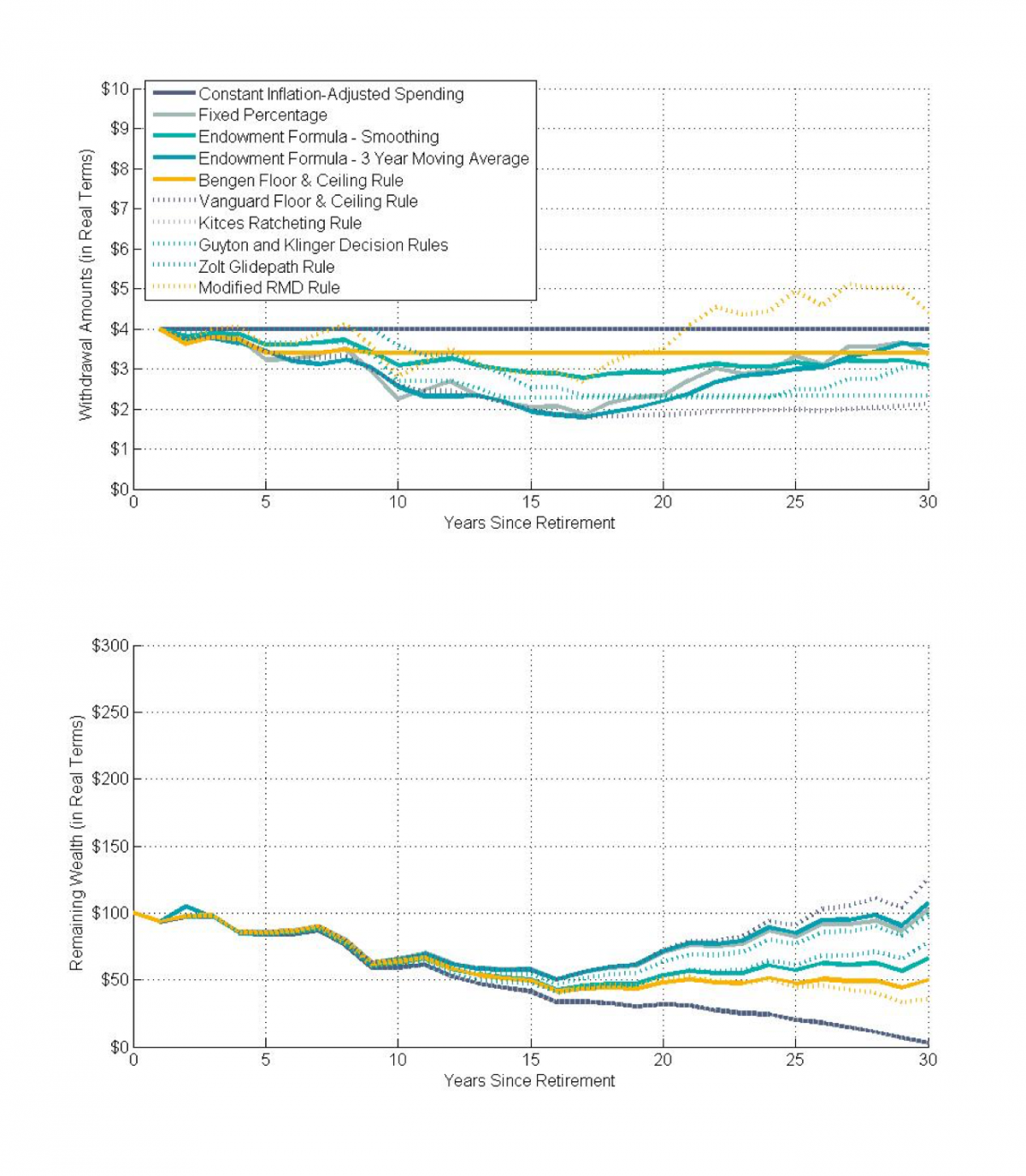 The most aggressive spending increases are seen with the modified RMD rule, the fixed percentage rule, and Guyton and Klinger’s decision rules. The modified RMD rule is the only strategy that experienced a decline in real wealth by year thirty as spending levels rose dramatically. This strategy works most efficiently to spend down remaining assets.

Performance for All Strategies, 1982 Retiree 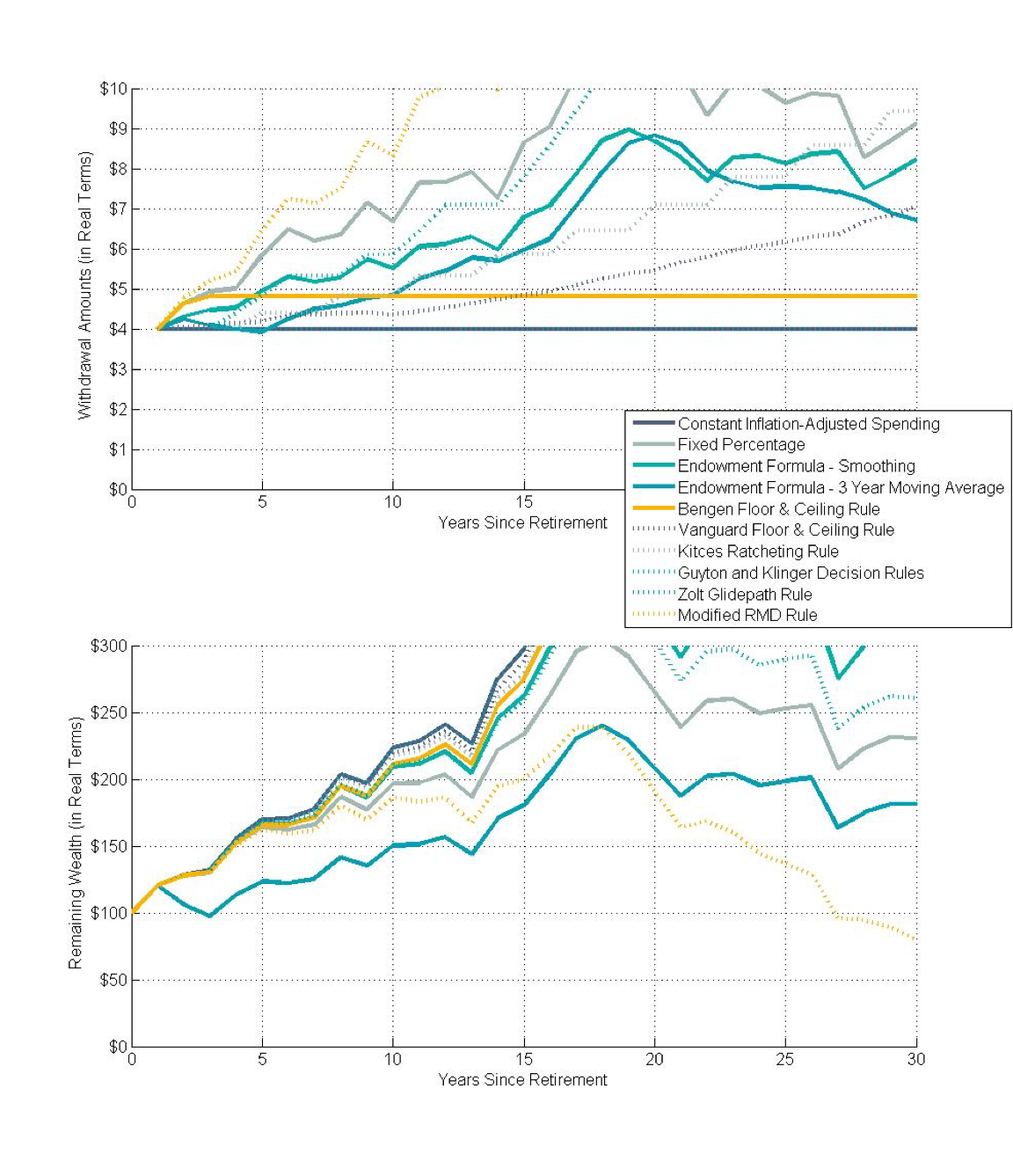 Finally, Exhibit 3 shows the spending path for the ten strategies beginning from 1946, a more typically average year to retire. For this retirement year, the variable strategies experienced a reduction in spending in the early part of retirement that was overcome later in retirement when spending typically increased.

Remaining wealth after thirty years is the lowest with the modified RMD strategy. Other strategies tend to have wealth levels between 75% and 100% of the initial retirement amount.

Performance for All Strategies, 1946 Retiree