What Do TIPS Tell Us About Future Inflation Rates?

Today, I want to talk about what TIPS can tell us about inflation.

Exhibit 1 shows the TIPS yield curve for January 3, 2017. Yields are negative for TIPS maturing prior to 2022, and positive beyond that, although the longest ones do not even reach 1%.

The Treasury stopped issuing thirty-year TIPS in the early 2000s and, more recently, eliminated twenty-year TIPS. That is why you see gaps in the yield curve—represented by dashed lines in the exhibit—with no TIPS maturity in 2030-31 and 2033-39. 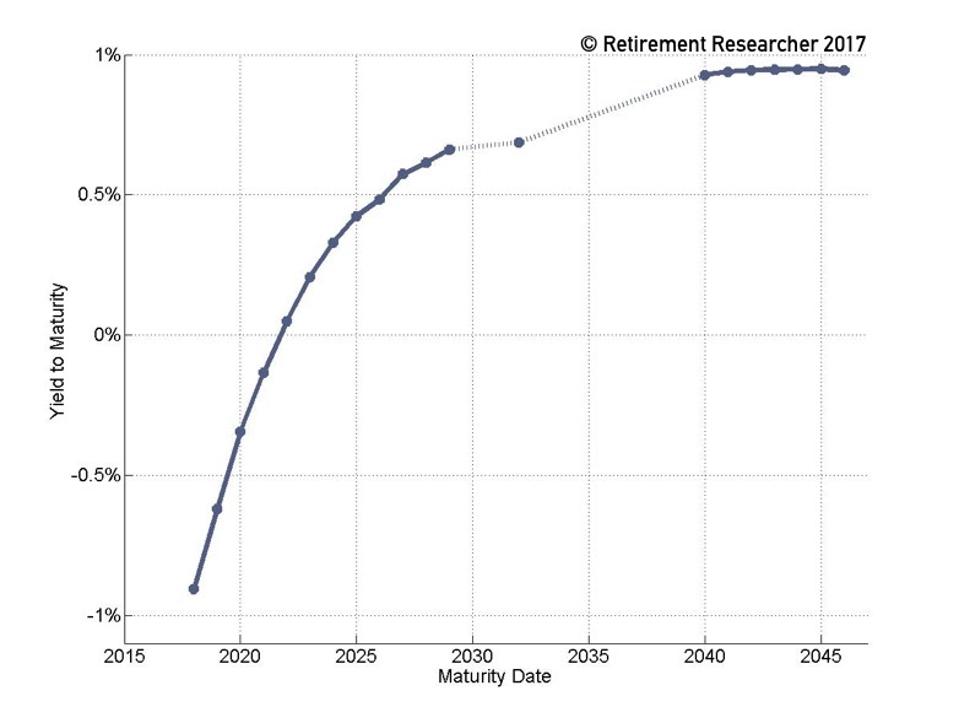 Before the introduction of TIPS, real interest rates were less transparent. They could be estimated only by first estimating what people believed inflation would be in the future.

Notice how the movement of the curves is almost parallel. The difference between them is the expected inflation rate. In 1981, real interest rates were close to 8%, while nominal interest rates exceeded 15%. Both have consistently decreased since that time, with real rates reaching their lowest levels in 2013. 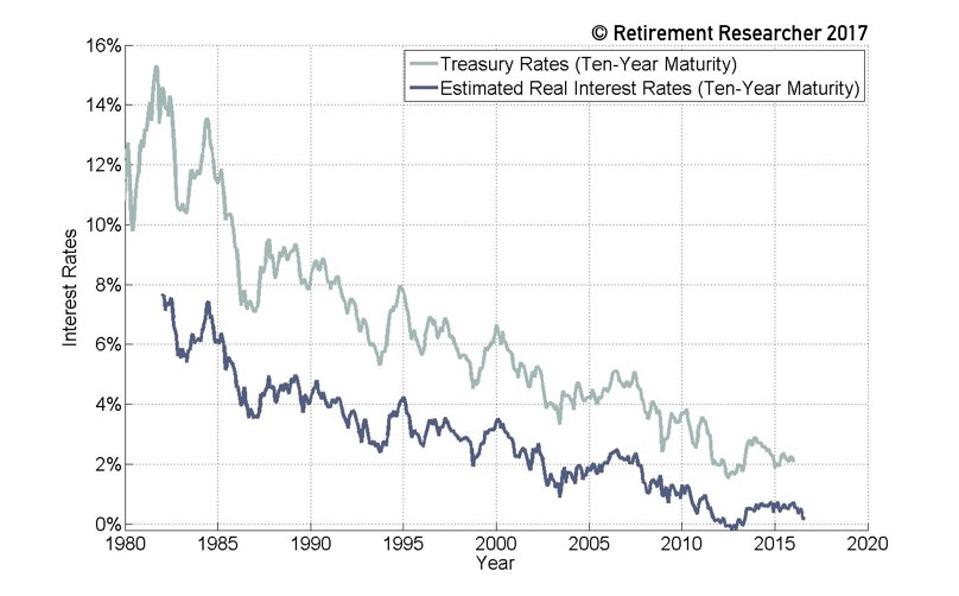 With TIPS, we now have a better idea of market expectations for future inflation, though I would not call it perfect. TIPS offer a breakeven inflation rate, defined as the difference in yields on the same maturity of traditional Treasuries and TIPS.

TIPS yields may not reflect the true underlying real interest rate because they have a few other components built into their pricing.

TIPS yields can be broken down into three components:

According to Jennifer Roush, William Dudley, and Michelle Steinberg Ezer of the New York Federal Reserve Bank, since the introduction of TIPS, all three of these components have boosted TIPS yields relative to conventional bonds in ways that cannot be expected to continue in the future.

In particular, when TIPS were first introduced, they offered a substantial premium to compensate for this illiquid new market. The authors discuss one set of estimates the authors that suggests as much as 200 basis points (2%) of the yield for early ten-year TIPS derived from this premium.

As markets became more established, the illiquidity premium declined, bringing TIPS yields down with them, suggesting that the days of 3-4% yields may now be a relic of history as this premium will likely never return.

The inflation-protection premium is the yield investors are willing to sacrifice for the unique protection TIPS provide against unexpected inflation—similar to an insurance premium.

Roush et al. cite several studies that believe inflation-protection premiums have been low since the introduction of TIPS, as investors may not have been too worried about inflation in these years. If true, this would also cause TIPS to sell for lower prices, meaning higher yields and a lower breakeven inflation rate than otherwise possible.

If inflation becomes a bigger concern in the future, then investors may be more willing to pay for an inflation-protection premium, resulting in lower TIPS yields and a higher perceived breakeven inflation rate.

Rather than waiting to buy TIPS until everyone starts worrying about inflation, a natural time to purchase is before inflation becomes a major concern.

Despite the other factors of TIPS pricing, the difference between Treasury and TIPS rates for the same maturity represents a reasonable market estimate of future inflation expectations. Exhibit 3 returns us to January 3, 2017, to find this difference.

Consider the thirty-year maturity. A thirty-year Treasury bond yields its owner a nominal 3.04% yield. Its real yield is unknown and depends on realized future inflation.

Meanwhile, a thirty-year TIPS offers a real yield of 0.94%. Its nominal yield is unknown, as it also depends on realized future inflation. The difference between these yields is the implied breakeven inflation rate: 2.1%.

Without a liquidity or inflation-protection premium, this represents the market’s equilibrium estimate of future inflation. Over the next thirty years, the markets have priced in expectations for inflation of only around 2%.

If realized annual inflation exceeds 2.1% over the next thirty years, then TIPS will outperform Treasuries. But if it falls short, TIPS will underperform.

If enough traders thought inflation would be higher than this, they would buy TIPS and sell Treasuries, raising the price of TIPS, and giving us lower TIPS yields, higher Treasury yields, and a larger breakeven inflation rate. Such trading would continue until the market reaches the equilibrium we observe.