Why Does Everyone Experience Such Different Retirement Income Outcomes?

Individual investors are vulnerable to the sequence of market returns experienced over their investing lifetimes. Individuals who behave in exactly the same way over their careers—saving the same percentage of the same salary for the same number of years—can experience disparate outcomes based solely upon the specific sequence of investment returns that accompanies their career and retirement.

Peak vulnerability is reached at the retirement date, when returning to the labor force becomes increasingly difficult and a post-retirement market drop can be devastating. Actual wealth accumulations and sustainable withdrawal rates will vary substantially among retirees, as these outcomes depend disproportionately on the shorter sequence of returns just before and after the retirement date.

In other words, individuals are the most vulnerable when their wealth is likely the largest it has ever been, in absolute terms, due to the sequence of returns. Two investors may enjoy the same average return on their investments, but could still experience divergent outcomes based on the sequence in which returns arrive.

Historical simulations based on overlapping periods reveal how sequence of returns can create differing outcomes for otherwise identical investors. We’ll look at the life of one individual investor we’ll call Adam.

The only unknowns Adam faces with regard to his retirement planning is what his specific sequence of market returns will be. This simplifies reality, as Adam is not saddled with uncertainty in his future employment status and salary.

Adam saves for retirement during the final thirty years of work, and he earns a constant real income in each of these years. For thirty years, he puts away a fixed savings rate of 15% of his income at the end of each year.

A $100,000 salary means a $1 million portfolio. In this simplified world, Adam does not worry about health risks, disability, or potential involuntary job loss. He can continue work over the next thirty years earning a constant inflation-adjusted salary.

Adam retires at the start of the thirty-first year, and his retirement lasts thirty years. Withdrawals are made at the beginning of each year during retirement. The withdrawal amount is defined as the percentage of retirement date assets withdrawn (e.g., 4%), and this amount adjusts for inflation in subsequent years.

The maximum sustainable withdrawal rate over thirty years is the initial percentage of assets withdrawn in the first year. That amount is adjusted for inflation in subsequent years, and the portfolio balance reaches zero at the end of the thirtieth year of retirement. For simplicity’s sake, portfolio administrative and planning fees are not charged, and taxes are not deducted.

Despite saving in the same way from identical salaries and using the same 50/50 asset allocation, one Adam was able to save more than 3.3 times as much as the other. These are very different outcomes, again, for individuals who otherwise behaved in identical ways and were only exposed to a different sequence of market returns during their working years.

Wealth Accumulation After a 30-Year Career 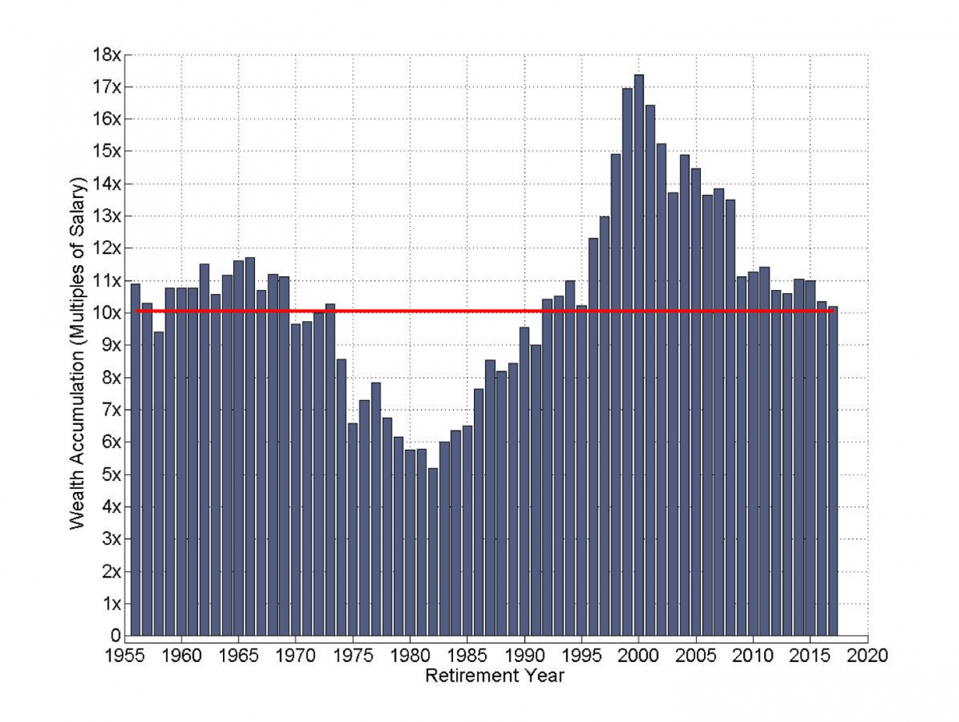 Wealth Accumulation After a 30-Year Career

Even individuals whose careers largely overlap may still experience different outcomes. For instance, retirees in 1973 and 1975 had twenty-eight of their thirty working years overlap, but the 1975 retiree reached retirement with 36% less real wealth than the 1973 retiree.

William Bernstein, in his 2012 ebook, Ages of the Investor, used waterfalls to describe the large drops in wealth accumulations that may follow wealth peaks, explaining how some individuals might unwittingly just miss their opportunity to reach their wealth target after thirty years, and subsequently may find that working for much longer does not get them back to where they had hoped to be.

This is sequence of returns risk in the context of the accumulation phase, as people are more vulnerable to the returns experienced when their portfolios are larger. A given percentage change has a bigger impact on absolute wealth, and a large drop in the portfolio value could counterbalance all of the capital gains earned for most of the early part of your career.

The sequence of returns problem occurs even more harshly for retirees using a constant inflation-adjusted spending strategy. With compounded returns of 5.1%, a retiree could expect to withdraw 6.3% of their retirement date assets, adjust this for inflation, and have their wealth last for precisely thirty years. 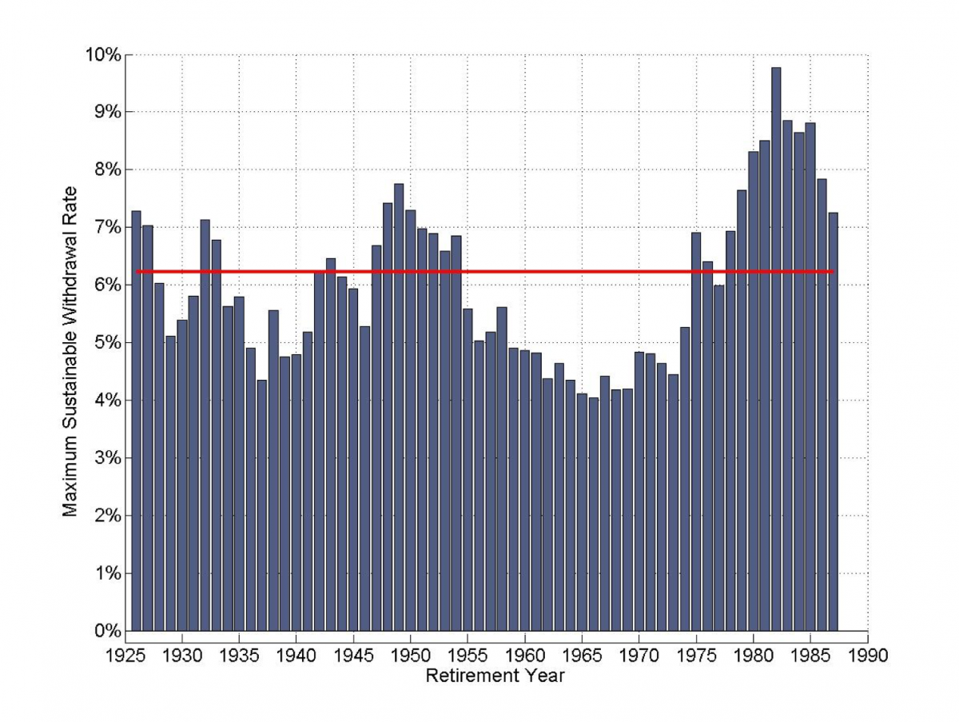 Next, Exhibit 3 attempts to give a clearer picture of how sequence of returns risk impacts both the accumulation and distribution phases. The exhibit is based on statistical regression analysis, which determines how much of the outcome (wealth accumulation or sustainable withdrawal rate) can be explained by the returns experienced in each year of the lifecycle.

The exhibit isolates the impact of each year’s return on lifetime outcomes using a larger sample of 100,000 Monte Carlo simulations based on a 50/50 portfolio with the same characteristics as the historical data. For the first thirty years (when individuals are saving), the percentage of the final wealth accumulation at the retirement date grows from year one through year thirty.

In years thirty-one through sixty, during the retirement distribution phase, the exhibit shows the impact of each year’s return on the maximum sustainable withdrawal rate. The return in year thirty-one represents the first year of retirement; this initial return explains almost 14% of the final outcome for retirees.

Retirees are extremely vulnerable to what happens just after they retire. This result would hold even more so with the human capital considerations of the real world, as it is increasingly difficult to return to the workforce after you retire. Sustainable withdrawal rates are disproportionately explained by what happens in the early part of retirement.

Returns from later in retirement have minimal impact as the outcome for that retirement (high or low sustainable spending) was already set in motion earlier. 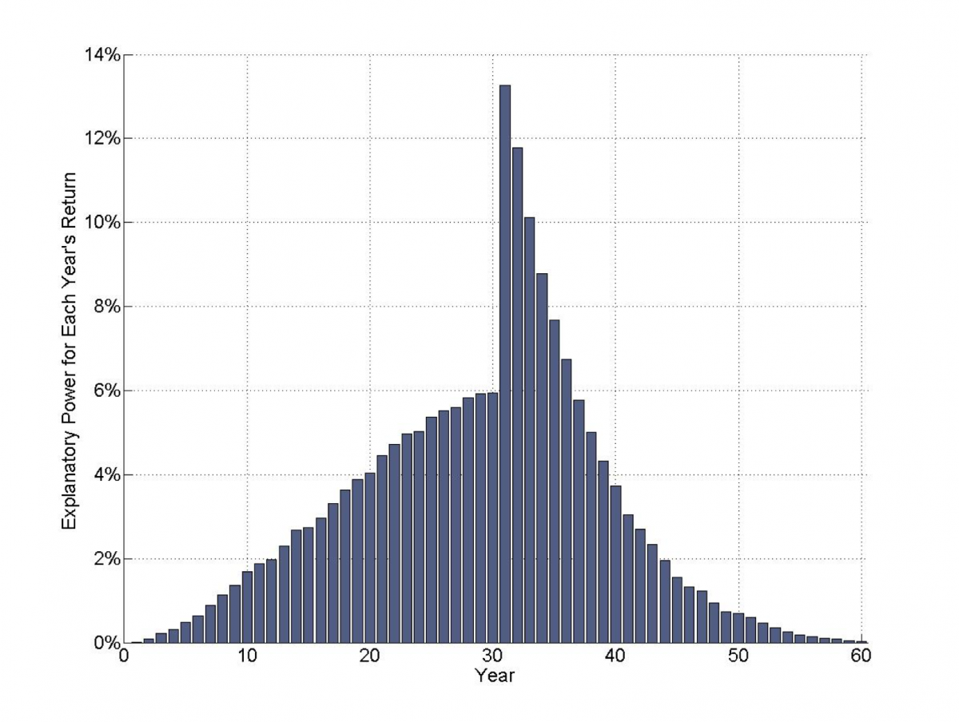 Strategies using a volatile portfolio to target a wealth accumulation goal or to sustain a constant spending strategy expose individuals to much greater risk than you might expect when thinking about an average return that might apply to someone investing over a sixty-year time horizon.