What Is The ‘Floor & Ceiling’ Retirement Spending Strategy?

In a 2001 article, William Bengen offered a new balance between the constant amount and fixed percentage strategies with his “floor and ceiling” spending approach.

This method begins by applying the fixed percentage rule, which allows greater spending when markets are up and forces spending reductions when they are down. While he still allows spending to fluctuate considerably, Bengen’s new strategy implements limits in both directions with hard dollar ceilings and floors.

Exhibit 1 provides a baseline example for this family of rules. The ceiling is set at 20% above the real value of the first year’s withdrawal, and the floor is 15% below that same value (unless wealth depletes).

With an initial real withdrawal of $4 from $100, the floor and ceiling are set at $3.40 and $4.80, respectively. This smooths fluctuations by keeping spending from drifting too far from its initial levels.

While the hard dollar floor ensures spending never drops too low, it is important to recognize that it also restores the possibility of portfolio depletion, which the fixed percentage rule seeks to eliminate.

In addition, the failure rate comparison for this rule will be less meaningful if spending is already lower in the period before wealth depletion than with constant inflation-adjusted spending. Bengen determined that the floor and ceiling rule increased the historical worst-case initial spending rate by 10%, thanks to its allowance to cut spending when markets perform poorly.

Exhibit 1 illustrates what happens when initial spending remains at 4% and spending fluctuates only within the band allowed by the rule.

Remaining wealth is also better supported on the downside as a result of the 15% spending reductions. In poor market environments, the reduced spending helps preserve the portfolio balance so about 50% of the initial portfolio balance remains after thirty years.

With the constant inflation-adjusted spending rule, some scenarios put the portfolio on the verge of depletion after thirty years, so this spending rule has made a substantial contribution to preserving wealth in the worst-case scenarios. A willingness to reduce spending by up to 15% from the initial level provided a great deal of support for sustaining the investment portfolio in retirement.

Placing a ceiling on spending will preserve sustainability by saving more than is needed in case of a rainy day. While including a floor on how far spending can fall opens the possibility of wealth depletion, it becomes increasingly unlikely as the minimal floor decreases. 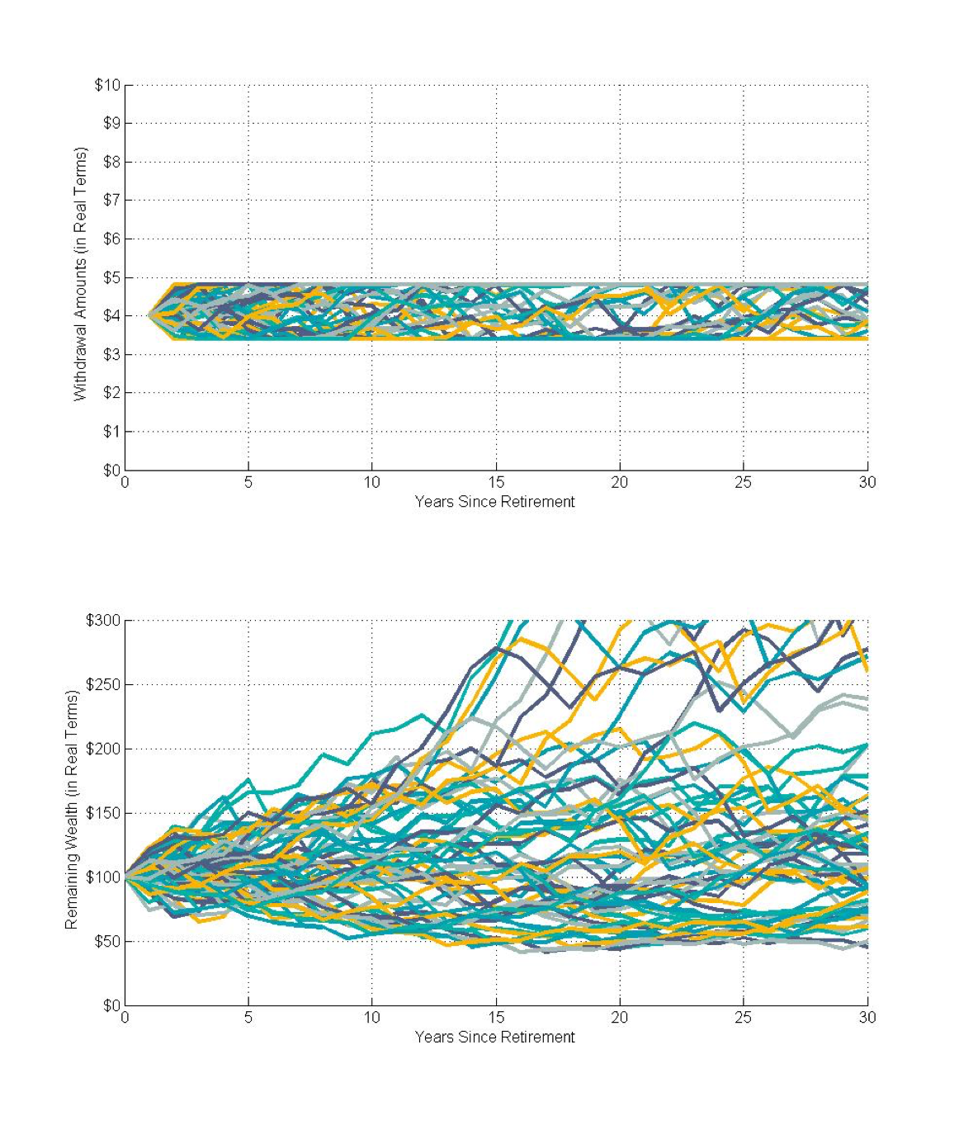