How Does the Line Of Credit for a Reverse Mortgage Work?

A mortgage’s effective rate is applied not just to the loan balance, but also to the overall principal limit, which grows throughout the duration of the loan. How the effective rate is applied may sound technical, but it is an overwhelmingly important point to understand in order to grasp the value of opening a line of credit as early as possible.

Typically speaking, the principal limit, loan balance, and remaining line of credit all grow at the same rate. There have been rare past cases in which a reverse mortgage included a servicing set-aside that grew at a high enough expected rate that the set-aside balance grew even as expenses were paid, but that is not to be expected. As such, a consistent growth rate will be true for all new loans today, since any new set-asides will also grow at the same effective rate.

Likewise, Figure 3 below expresses the same concept. The overall principal limit consists of the loan balance, remaining line of credit, and any set asides. Again, all of these factors grow at the same effective rate, which will increase the size of the overall pie over time. If no further spending or repayment happens over time, then the proportions of each of these components of the principal limit will remain the same, since they all grow at the same rate.

Figure 3: Components of the Principal Limit 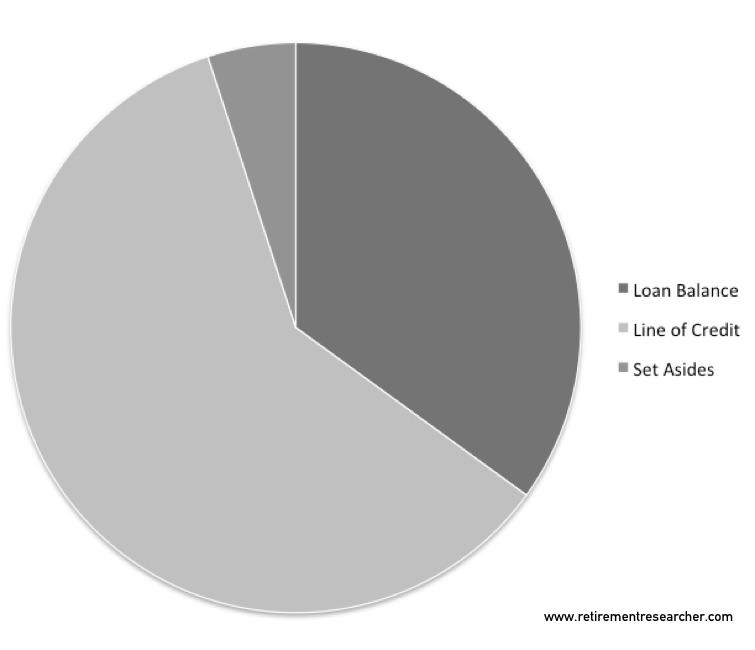 The ability to have an unused line of credit grow is a valuable consideration for opening a reverse mortgage sooner rather than later. It is also a detail that creates a great deal of confusion for those first learning about reverse mortgages, perhaps because it seems this feature is almost too good to be true.

I speculate that the motivation for the government’s design of the HECM reverse mortgage program is based on an underlying assumption that borrowers would spend from their line of credit sooner rather than later. Implicitly, the growth in the principal limit would then reflect growth of the loan balance moreso than the growth of the line of credit. In other words, designers assumed the loan balance would be a large percentage of the principal limit.

The line of credit happens to grow at the same rate as the loan balance, and if left unused, the line of credit could grow to be quite large. There was probably not much expectation that individuals would open lines of credit and then leave them alone for long periods of time. However, as will be discussed, the brunt of the research on this matter since 2012 suggests that this sort of delayed gradual use of the line of credit can be extremely helpful in prolonging the longevity of an investment portfolio.

If this discussion is too abstract, a simple example may help to illuminate the blunt usefulness of this concept. Consider two different individuals who each open a reverse mortgage with a principal limit of $100,000. To simplify, we assume that ten years later the principal limit for both borrowers has grown to $200,000.

However, Person B opens a reverse mortgage but does not use any of the credit, so that the $200,000 principal limit at the end of 10 years fully reflects the value of the line of credit. The principal limit was still 100% in the line of credit. This value was calculated with an implicit assumption that interest and insurance payments have been accruing, even though they haven’t.

Person B can then take out the full $200,000 after 10 years, and have the same loan balance as Person A, but Person B has received $200,000 rather than $100,000. At this point, Person B has bypassed the accumulation of the interest and insurance, to the detriment of the lender and the mortgage insurance fund.

One other question that will arise is: Would the line of credit ultimately be larger when it is opened early on, rather than waiting until later to open it? We can further explore this question with a more realistic type of example. Figure 4 below provides an illustration about the impact of opening the reverse mortgage at different points of time using a few basic assumptions.

To still keep matters relatively simple, I assume that the one-month LIBOR rate stays permanently at 0.4% and the 10-year LIBOR swap rate remains permanently at 2.1%. The lender’s margin is assumed to be 4%, and home inflation is 2%.

At 90, the principal limit has actually exceeded the value of the home. As a side note, if this principal limit were reflected as a loan balance instead of a line credit, the loan is non-recourse and the amount due by the borrower cannot exceed the home’s value – this is a guarantee supported by the insurance premiums.

Nonetheless, even at age 90, the available principal limit for a new reverse mortgage is only $286,046, which is based on a PLF of 64.8% applied to a higher home value. The overwhelming message from this example is that opening the line of credit early allows for a much greater availability of future credit relative to what could be obtained by waiting to open the reverse mortgage later in retirement.

Figure 4: Comparing Principal Limits Based on When the Reverse Mortgage Opens 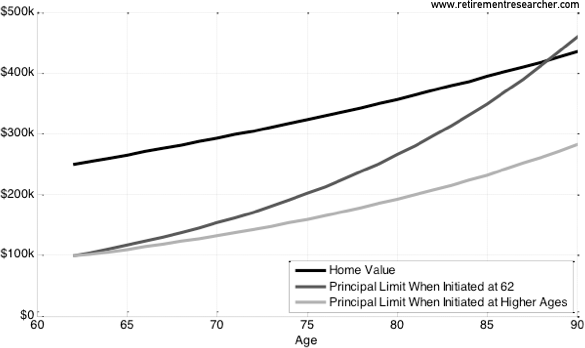 Only extreme growth in home prices could possibly allow more credit to be obtained by delaying the start of a reverse mortgage, but higher home price growth would surely be caused by higher inflation which would also increase interest rates and reduce the future PLF. It seems to be a relative certainty that more credit will be available in the future by starting the reverse mortgage as soon as possible rather than by waiting to open it later.

All of this may sound too good to be true, and it probably is, to some extent. Perhaps this is a reason why it is difficult to grasp the concept of line of credit growth throughout retirement. I’ve already noted that unused lines of credit work for borrowers to the detriment of the lenders and the government insurance fund. Such use of a reverse mortgage does still exist today and would be contractually protected for those who initiate reverse mortgages under the current rules. But at some point in the future, I would expect to see new limitations about line of credit growth, especially as more people start to follow the findings of recent research on this matter.

Line of credit growth may be viewed a bit like an unintended loophole that is strengthened by our low interest rate environment. The rules will probably be changed someday for newly issued loans. Until then, research points to this growth as a valuable way reverse mortgages can contribute to a retirement income plan.