WHAT IS OCCAM’S RAZOR?
Occam’s Razor is a principle attributed to William Occam, a 14th century philosopher. He stressed that explanations must not be multiplied beyond what is necessary. Thus, Occam’s Razor is a term used to “shave off” or dismiss superfluous explanations for a given event. This concept is largely ignored within the investment management landscape. This quarterly newsletter will “shave off ” popular investment misinformation and present what is important for achieving long-term investment success.

Whenever the markets start getting choppy investors start getting nervous. We get all sorts of different questions – usually centered around whatever happens to be making people nervous this time. But almost invariably, we get a whole bunch of questions about dollar cost averaging. And this makes a lot of sense – if you’re nervous about the markets, you probably aren’t all that excited about moving everything in at once.

One of the common misconceptions is that you are effectively dollar cost averaging when you are saving money every month, or from every paycheck (or however you happen to do it). Dollar cost averaging is fundamentally different from saving because when you’re putting money to work as you’re earning it, you literally cannot put it to work any faster – it’s not sitting in cash (or other “safe” security) for any appreciable length of time. Dollar cost averaging is defined by the choice to leave some, or all, of your portfolio sitting in cash, rather than putting it to work.

There’s a lot of inherent appeal to dollar cost averaging. Whenever you have a large chunk of money waiting to be invested, you likely are emotionally invested in that money. You may have sold your business, or you received an inheritance, or it’s the lump sum payout from your pension, or something similar, and even though you know that you should put that money to work, it’s daunting to put it all into the market at once.

Because of this, a lot of people feel more comfortable easing their way into the market with their new money – especially if the market has been choppy lately. So figuring out how to handle this money can be pretty difficult.

But from a purely logical perspective, the decision is straightforward. Assuming that you have an appropriately designed portfolio, there really is no reason not to put the money to work immediately. If you’re comfortable with the risk and return tradeoff in your portfolio you should want that money invested as soon as possible.

It is exactly this simple. And nowhere near this simple at the same time.

The reason that you might not want to be completely logical with this decision is because of that emotional component to the money. How would you react if you put your money to work, and the next day the market dropped by 4.5%, like it did back in the beginning of February? We have no way of predicting what short term returns will look like, so it’s within the realm of possibility. Would you be able to stay disciplined, and keep the money invested? What if you happened to invest everything just before the market started going down for a longer period?

If dipping your toe in the market and easing your way in will help you stay disciplined over the long term, it may make sense to take things slow.

But it’s important to understand the cost of that emotional security. So let’s run some numbers.

Before we look at the actual numbers, what do we expect to see with the returns? Well, since a good chunk of the portfolio will be held in cash for a lot of the year, I’d expect to see both a lower return and a lower standard deviation for the portfolio using dollar cost averaging versus the portfolio that is fully invested for the full year.

And this is what we see.

To see what the difference in returns between the two portfolios is we’ll use rolling quarterly returns from 1950 through 2017, and look at the year beginning each quarter. One portfolio will be fully invested over that quarter, and the other will use the dollar cost averaging schedule laid out earlier. And then we’ll simply look at the difference between the two. Pretty straightforward. 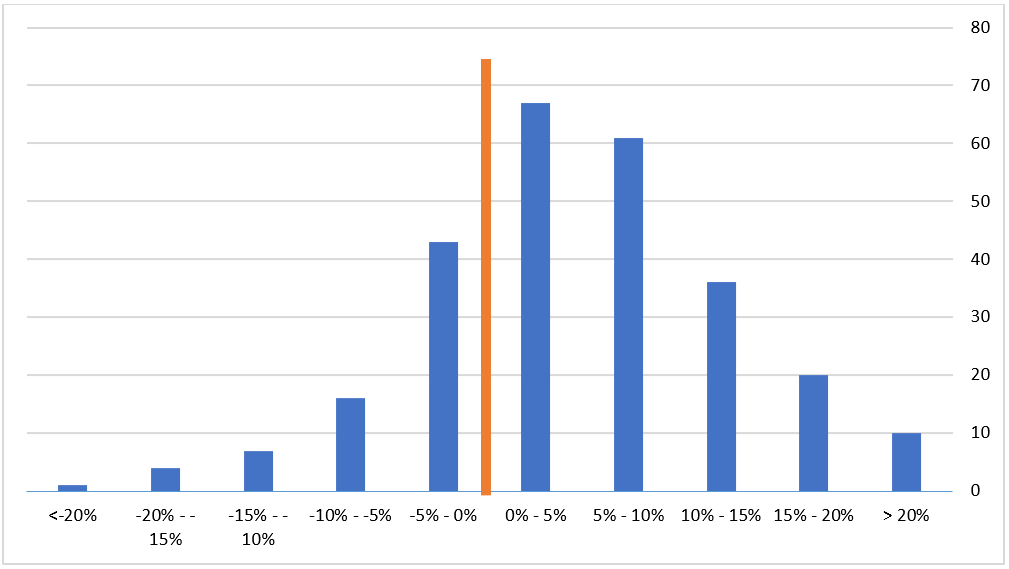 Data from 1/1950 – 12/2017. Indices are not available for direct investment. Past performance is not a guarantee of future results. Based on rolling annual returns using quarterly data of a portfolio fully invested in the S&P 500 Index minus the returns of a portfolio using dollar cost averaging(25% invested in Q1, 50% invested in Q2, 75% invested in Q3, and 100% invested in Q4. This statistical dependence must be considered when assessing the reliability of long-horizon return differences. S&P data from Yahoo! Finance.

While there were some outliers, what I really want to look at here is just how tilted this chart is. All of the observations to the left of the orange line were the times when dollar cost averaging beat being fully invested, but all of the points to the right of the line was when being fully invested won. If you were to select a random point in this period, there is a 73% chance that you would have been better off putting your money to work immediately than easing into your portfolio.

The numbers pretty clearly come down in favor of getting your money invested as fast as possible. But this does not mean that dollar cost averaging is a bad strategy. It means that it needs to be used appropriately.

If using dollar cost averaging will help you invest that big pot of money that you have sitting on the sidelines, or help you stay disciplined as you put that money to work, it can be a great tool. The return on a partially invested portfolio (that’s moving towards being fully invested) is a lot better than the return of a portfolio that is just sitting in cash – or worse, one where the market dropped after you invested and then you sold out.