The Problems With A Constant Retirement Spending Strategy

The first method to be tested is the original constant inflation-adjusted withdrawal strategy introduced in William Bengen’s 1994 article, “Determining Withdrawal Rates Using Historical Data.” This will serve as a baseline for subsequent comparison with other strategies. Bengen’s rule says to adjust spending annually for inflation and maintain constant inflation-adjusted spending until the portfolio depletes.

Annual spending increases by the previous year’s inflation rate and does not otherwise adjust for market returns or the present size of the underlying investment portfolio. The withdrawal rate is defined only in terms of the first year of the plan, and subsequent spending rates are no longer tracked as an input to guide spending. Spending continues to adjust for inflation, regardless of portfolio size, unless and until the underlying portfolio is fully depleted.

We have already analyzed how this method performs in historical data. A 4% initial spending rate survived all of the rolling historical periods when using a 50/50 portfolio. Exhibit 1 shows how this plays out, with sixty-one lines (on top of one another, in this case) with real spending of $4, reflecting the sixty-one rolling historical thirty-year periods in the dataset for which the rule could provide a consistent real income.

We have already analyzed how this method performs in historical data. A 4% initial spending rate survived all of the rolling historical periods when using a 50/50 portfolio. Exhibit 1 shows how this plays out, with sixty-one lines (on top of one another, in this case) with real spending of $4, reflecting the sixty-one rolling historical thirty-year periods in the dataset for which the rule could provide a consistent real income.

The bottom part of the exhibit shows remaining wealth throughout retirement for each of the sixty-one rolling historical periods in the dataset. In contrast with the smooth income provided, remaining wealth is much more volatile. It runs as low as $3.36 after thirty years for the 1966 retiree (whose portfolio will deplete in year thirty-one) and up to $463.9 after thirty years for the 1982 retiree.

The volatility in remaining wealth is a byproduct of keeping spending at the same level regardless of portfolio performance. (These numbers are all scalable, as you can just multiply the assumed $100 initial wealth by the factor needed to obtain actual wealth to know the implications for spending and remaining wealth from a different starting point. For instance, spending $5 from wealth of $100 is the same as spending $50,000 from wealth of $1,000,000.) 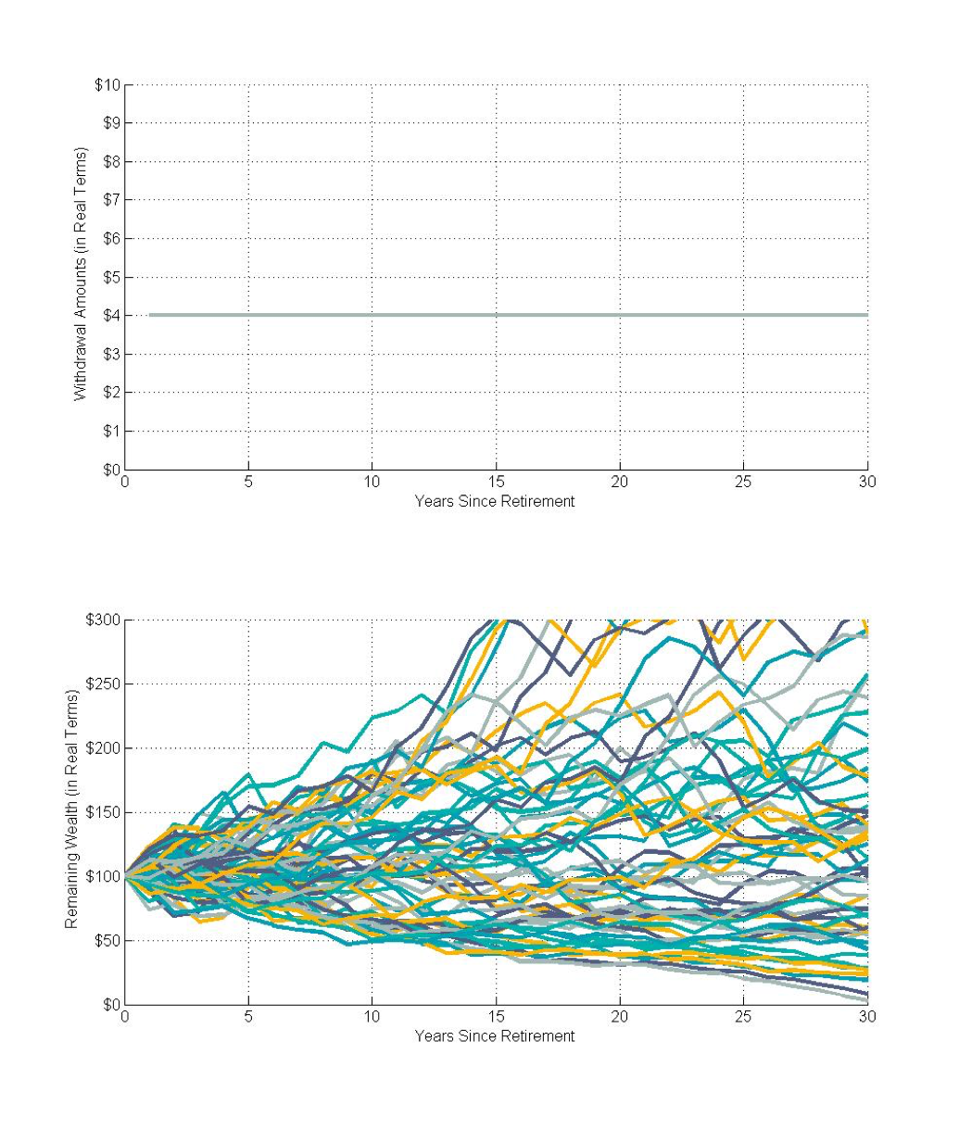 The benefits of Bengen’s strategy are numerous:

But it suffers from a number of disadvantages, too, primary among which is the retiree’s vulnerability to wealth depletion. Spending remains consistent until wealth hits $0. If the retiree has insufficient income sources outside the investment portfolio, this could have devastating implications.

Not only could the retiree’s preferred lifestyle be unattainable, but a minimally acceptable standard of living could prove to be too expensive. This strategy is particularly risky for those lacking sufficient resources elsewhere to cover basic needs.

This strategy also uniquely increases sequence of returns risk by calling for constant real spending from a volatile investment portfolio. Safety-first advocates would argue that this strategy is inherently flawed—those seeking constant spending should use a less volatile retirement strategy, and those who accept portfolio volatility should also accept spending volatility.

A progressively lower spending rate is required to manage the increased sequence risk. As the portfolio declines, a reduction in spending is essential to prevent the discrete drop-off in spending power when the portfolio reaches $0.

The constant strategy is also extremely inefficient. If market performance is in whatever would be considered a “worst-case” scenario when a spending rate is chosen, spending will fall well below what would be feasible and sustainable.

Your wealth will continue to grow unabated as your current spending rate drops (a constant spending amount from an increasing portfolio means a lower subsequent spending rate). On the upside, in good market scenarios, legacy wealth ends up being greater than with most other strategies because there is no mechanism to allow for spending increases in retirement.