Safe Withdrawal Rates for Retirement and the Trinity Study

One of the classic studies in the field of financial and retirement planning is the Trinity Study, a nickname for the article, “Retirement Spending: Choosing a Sustainable Withdrawal Rate,” by Philip L. Cooley, Carl M. Hubbard, and Daniel T. Walz (all professors at Trinity University in Texas). It appeared in the February 1998 issue of the Journal of the American Association of Individual Investors.

This research followed the same methodology used by William Bengen, whose 1994 article is the source of the “4% rule” for retirement income planning. What was different in the Trinity Study was the shift in emphasis away from William Bengen’s SAFEMAX, or the highest withdrawal rate possible in the worst-case scenario from history, toward the idea of “portfolio success rates.” An unfortunate side effect of this redirection is that the meaning of these portfolio success rates are widely misinterpreted, but more on that in a moment.

There was one important difference in the assumptions between William Bengen’s work and the Trinity study, which I think furthered some of the misunderstandings about the latter study. This difference regards the choice of bond indices. While Mr. Bengen’s original research combined the S&P 500 index with 5-year intermediate term government bond returns, the Trinity Study used long-term high-grade corporate bond returns instead. The different choice for bonds explains why the worst-case scenario for Mr. Bengen (his SAFEMAX) was a withdrawal rate of 4.15%, but why the original Trinity Study found that a 4% withdrawal rate only had a 95% success rate. With more volatile corporate bonds, the sustainable withdrawal rate dipped slightly below 4% in 1965 and 1966. This led people to hear that the 4% rule has a 95% chance for success, though that is only the historical data, and it does not imply that today’s retirees will enjoy the same odds for success. Nonetheless, a 95% chance for success has a special meaning in statistics about providing a good level of confidence, as so it easy to misunderstand this point.

Since keeping volatility low is just as important as obtaining high returns, I do think it makes more sense to use intermediate term government bonds than to use corporate bonds. So my re-creation and update of the Trinity study here will follow Mr. Bengen’s choice and will also include the assumption that withdrawals are made at the start of the year rather than the end of the year.

William Bengen’s research gave us the SAFEMAX, which he defined as the highest sustainable withdrawal rate in the worst-case scenario from rolling periods of the historical data. The Trinity Study went a step further by tallying up the percentage of times that withdrawal rates fell below or above certain levels. They calculated these portfolio success rates for different withdrawal rates, for different time horizons, and for different asset allocations.

For instance, what is the success rate for a 5% inflation-adjusted withdrawal rate over a 30-year period with a 50/50 asset allocation?  To answer, note that there are 60 rolling 30-year periods starting between 1926 and 2014.  These rolling 30-year periods begin in the years 1926 through 1985. Nothing is known yet for the 30-year results of more recent starting periods.  Of these 60 rolling periods, we can count up the number of times that the historical surviving withdrawal rate was at least as high as 5%. The answer is 41 times. That means the portfolio success rate is 100 x 41 / 60 = 68%, as can be seen in the table below. 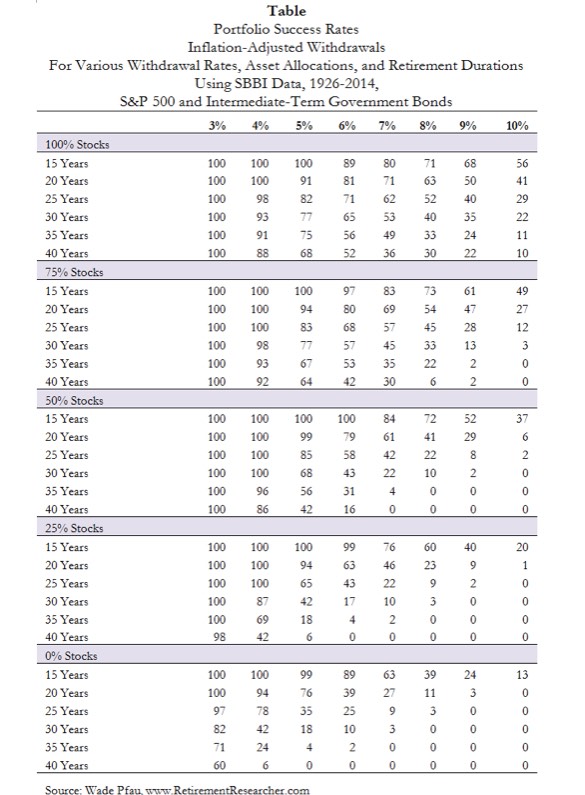 As well, I know of at least one radio announcer who talks about an 8% withdrawal rate being safe with a 100% stock portfolio, and the Trinity study does help to clarify how wacky that notion is.  After 25 years, it’s a coin flip about whether any assets are left for someone following that strategy in the historical data.

It’s important to be clear that these success rates are based on U.S. history. It is faulty logic to think that these are the success rates applying to new retirees today. The particular situation today is that interest rates are so low relative to history, and this is a very important matter when assessing the viability of different withdrawal strategies. So while I know that the Trinity study is still quite popular in practice, I would suggest a lot of extra caution for anyone seeking to plan their retirements using these numbers.