A lot has already been written about the sequence of returns risk confronting retirees. But the full implications of sequence risk have not been completely internalized. Retirees become more vulnerable to investment volatility, because as they withdraw from their portfolio they may find themselves locking in investment losses. It’s the opposite effect from dollar cost averaging.

In my new column at Advisor Perspectives, I aim to walk readers through the differences between investment risk and sequence risk. I do this by looking at the example of rolling 30-year retirement periods in the US historical data. Over different 30 year periods, the average return earned by an investment portfolio can and does vary. I think of those differences as the investment risk facing retirees. My first figure in the column plots those rolling 30 year average portfolio returns.

The next figure shows the implications for retirement withdrawal rates if investment risk were all that matters. I show the sustainable spending rates over rolling historical periods assuming one could plug in the average investment return into a spreadsheet and earned that return over the 30-year retirement period. This does create some volatility for the sustainable spending rates that would work for individuals retiring at different points in history.

But that volatility is only a small part of the story. The third figure in the article shows the actual sustainable spending rates over the different 30 year periods in history after also incorporating the specific sequence of investment returns earned by those retirees. These numbers are much more volatile than the numbers that only incorporated the investment risk. With a bad early sequence, retirees can end up in much worse shape than implied by whatever the average portfolio return they could have earned over the full 30 years. For instance, the average portfolio return from 1937 to 1956 would have implied a 5.28% sustainable withdrawal rate, but it was only 3.95% in reality (assuming no investment fees are paid).

I think this reflects the fundamental difference between investment risk and sequence risk. It also has important implications for how to construct a retirement income plan. The traditional 4% rule faces a vulnerability to not working, which extends beyond investment risk. I often hear the argument that if the economic environment got so bad that the 4% rule doesn’t work, then large financial institutions would also be destroyed and nothing could be expected to work. But this doesn’t necessarily have to be the case, as a particular cohort of retirees could experience very bad outcomes without necessarily implying an overall economic catastrophe for everyone. The vulnerability of the sequence risk extends well beyond investment risk. This is the story I tell more completely in the new column at Advisor Perspectives, so please have a look. 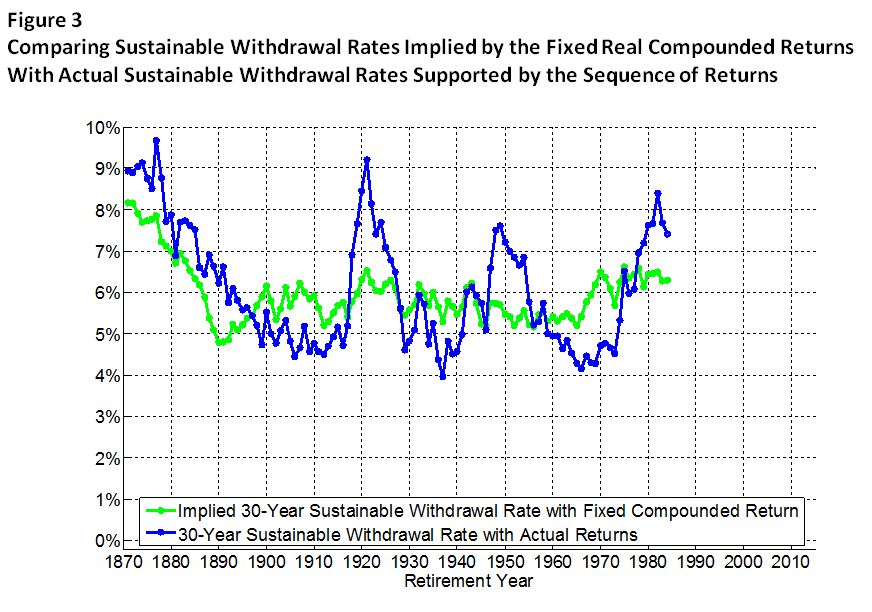 Next, read our eBook Spending from Investment Portfolios.