Social Security as an “Investment”

The alternative to treating Social Security as insurance is to view it as an investment, or as a gamble on how long one lives. This can be problematic. The investment approach focuses more on the breakeven age for when it finally pays to delay benefits. With inflation-adjusted discount rates of 0% to 2%, the breakeven age is 80 to 84. Though these ages are within the range of life expectancies for 62-year olds, they appear to be high, and clients start to worry that they may not live long enough for delay to pay off. They worry about losing out on potential benefits if they die early, rather than about running out of assets if they live a long time.

Certainly, if realized returns are this high, then claiming early is advantageous. But the odds are not in favor of getting that sort of investment return over the eight-year delay period, especially in our current low-yield world. This type of overconfidence requires amplifying risk for an asset that should otherwise be treated as a true backstop and safeguard for retirement income. It is difficult to fathom how the additional upside potential outweighs the downside risks from claiming Social Security early and investing the proceeds in the stock market, except possibly for those who are sufficiently overfunded that they don’t have any need their Social Security benefits anyway.

Nevertheless, while I prefer thinking of Social Security delay as insurance, I think we can reframe the discussion to view Social Security delay as a rather attractive “investment” proposition as well. This involves understanding the additional credits provided by delaying Social Security benefits, which were meant to be “actuarially fair.” For someone living to their life expectancy, it should not matter what age they claimed their benefits. The increase in benefits from delay should precisely offset the fewer number of years that benefits will subsequently be received.

However, these calculations about actuarial fairness for the delay credits were made as part of the 1983 Amendments to Social Security. The calculations are now more than 30 years old, and changes since that time suggest that delaying benefits can now provide net advantages. First, Social Security actuaries calculated the delay factors assuming that the real interest rate is 2.9%. In October 2015, the yield on 30-year TIPS was only about 1.2%. It was even less for shorter-term TIPS. Lower interest rates today mean that we should expect lower returns on other types of investments, which favors delaying Social Security as a way to actually obtain higher overall returns for the assets on the household balance sheet.

The other change relates to longevity. Longevity continues to improve and retirees are now living longer than they were in 1983. This, as well, favors delaying Social Security, as it improves the odds of living long enough to enjoy positive net benefits from delayed claiming. Relatedly, actuaries considered aggregate longevity for the population of Social Security participants, and my more highly educated and higher earning readers represent a socioeconomic subgroup of the overall population with can expect longer than average lives.

A simple example can help to illustrate how delaying Social Security can work as an “investment” which helps to improve portfolio sustainability for retirees. What follows is not an effort to optimize any decision-making, but rather to observe the long-term impacts of two different types of claiming strategies.

Consider a 62-year-old who has already left the workforce. We will consider the case of a single individual with no dependents. This leaves out additional complications, though having a spouse entitled to survivor benefits would further strengthen the case for delay. This individual is simply thinking about the decision between claiming Social Security at 62 or at 70.

For the example, the overall annual spending goal is $60,000 in today’s terms. Future spending grows with inflation. Her full retirement age is 66, and her PIA  is $2,500 per month or $30,000 per year in today’s dollars (all dollars are expressed as their age 62 values, though in subsequent years cost-of-living adjustments would be applied both to the overall spending goal and Social Security benefits). Should she claim at 62, her benefit would be reduced by 25% to $1,875 per month or $22,500 per year. Should she delay until 70, her benefit grows by 32% from the PIA to $3,300 per month or $39,600 per year. Inflation-adjusted Social Security benefits are 76% larger when claimed at 70 relative to 62. 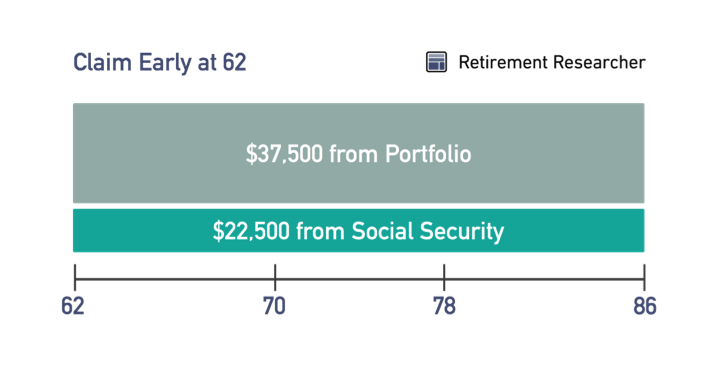 Meanwhile, when claiming at 70 , $60,000 will have to be supported by the portfolio for the first 8 years of retirement. Starting at 70, Social Security then provides $39,600 with the remaining $20,400 coming from the portfolio. 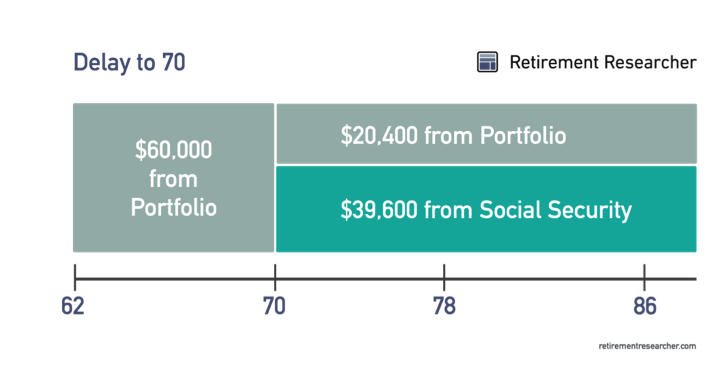 When claiming at 70, there could be two different withdrawal rates for before and after 70. However, it would not be wise to use a volatile investment portfolio for the full spending amount when Social Security is delayed, as that would magnify sequence risk. Instead, I use a conservative assumption that 8 years of age 70 Social Security benefits will be set aside from the portfolio at age 62 and earn a 0% real interest rate (building an actual 8-year TIPS ladder would provide a positive yield). At age 62, this means that $39,600 x 8 = $316,800 will be set aside as a Social Security delay bridge, illustrated below, leaving the other $483,200 for withdrawals. 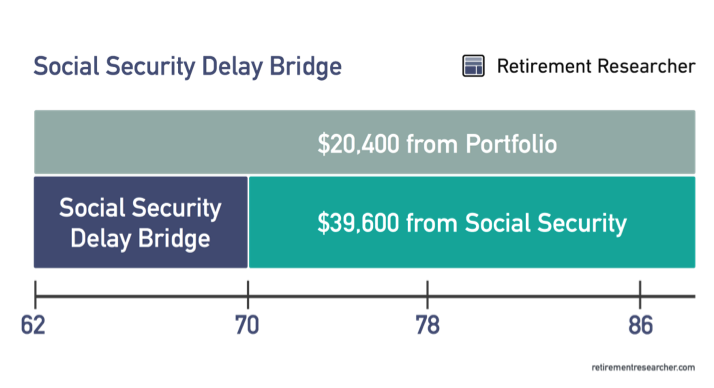 The required withdrawal rate to meet the spending goal throughout retirement is now:

In this example, Social Security delay allowed the withdrawal rate to drop from 4.69% to 4.22%. This improves retirement sustainability. The investment portfolio is less likely to be depleted and more income remains available through the higher Social Security benefit in the event that the portfolio is depleted. In other words, running out of financial assets is both less likely to happen and less damaging when it does happen.

Allowing for the same probability of portfolio depletion, spending could be increased by more than 11% to $66,682 in order to use the same 4.69% withdrawal rate as when claiming early. Then, 76% more income is still available than otherwise in the event of portfolio depletion. This is the permanently enhanced lifestyle possible with Social Security delay.

The basics of this example are illustrated below.

The magnitude of the difference would be larger if the client’s spending goal and asset base were smaller relative to the Social Security benefits, and vice versa.

For this strategy to work effectively, the overall spending goal cannot be too large with respect to the size of the financial portfolio. For instance, if the portfolio was $300,000, there would not be enough to create the delay bridge. Otherwise, a large enough portfolio will allow for Social Security delay to reduce the required portfolio withdrawal rate. And if the portfolio is not large enough, it is more of a reflection that the overall spending goal is not realistic, rather than an indictment against Social Security delay. Though, as will be pointed out later, severely underfunded retirees without alternatives may be forced to claim Social Security early because they cannot otherwise fund themselves through age 70.

The previous discussion has demonstrated how delaying Social Security receipt can improve the sustainability of a retirement income plan, or can otherwise support more spending power for the same success probability. It is necessary to withdraw more until Social Security starts, but retirees can then withdraw less after starting Social Security. The strategy is not fool-proof with only a volatile investment portfolio as a backstop, because a bad sequence of returns early in retirement could cause the portfolio to drop in value, locking in losses. But assets can be carved out of the main investment portfolio in order to create a Social Security delay bridge. Another alternative for retirees is to use other buffer assets from outside the financial portfolio, such as home equity through a reverse mortgage or possibly life insurance, as another alternative for constructing this bridge. Some practical ways to build a Social Security delay bridge are listed in the following table.