A final frame for viewing the Social Security claiming decision is as an annuity purchase. By starting at age 70 instead of 62, the retiree misses eight years of receiving a benefit of $22,500. But starting at 70 provides the retiree a net increase in benefits of $17,100 per year for as long as he or she lives. The eight years of lost benefits could be viewed as a premium payment for a $17,100 inflation-adjusted lifetime income starting at age 70.

By not claiming until 70, the eight-year loss of Social Security benefits comes to $180,000 (this is a slight overestimation, as it assumes a 0% real interest rate. Positive real rates are available from TIPS). This may seem like a big loss, but the $180,000 can be viewed as a premium for a deferred income “annuity” with inflation-adjusted income of $17,100 annually beginning at age 70. The implied payout rate on the “annuity” provided by delaying Social Security is 9.5%.

This is quite attractive when compared to commercial annuities – a deferred income annuity like this offers a valuable additional provision which cannot even be purchased commercially as no company offers a product with inflation protection for the initial payment amount. Though inflation protection is available as an option after income begins, today’s marketplace demands you calibrate real expected income from a deferred income annuity by using an assumed inflation rate (which will probably turn out to be a little off in the end).

The “investment” value of delaying Social Security can also be seen through internal rates of return. As with an income annuity, the internal rate of return from these cash flows depends on how long they last.  We can get some ideas by looking at the remaining life expectancy of 62-year-olds. 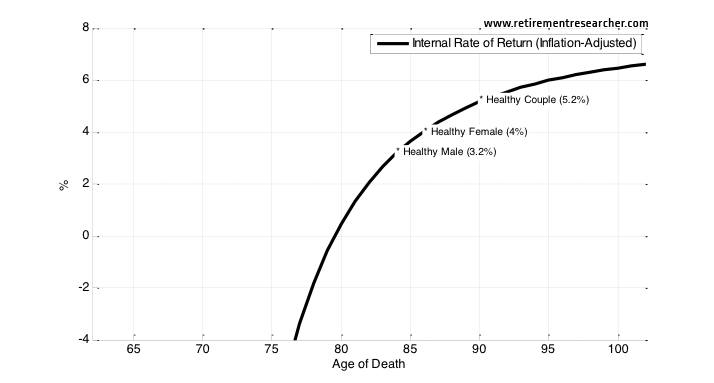 Though it depends on survival, delaying Social Security offers attractive investment returns compared to safe alternatives available today. It can really pay to spend down other assets more quickly until age 70. Though the portfolio will be smaller at 70, the reduced spending needs after 70 – because Social Security is paying 76% more in real terms – will leave you increasingly better off forever after. Those lucky enough to live far into retirement will preserve more of their portfolio for their heirs and be thankful they delayed Social Security.

Find out your Funded Ratio for retirement.