Which Are You More Worried About: Running Out Of Money While You’re Alive Or Dying?

The second general approach to dealing with the question of longevity and sustainable spending is to leave the concept of planning horizons behind and to simply incorporate survival probabilities into calculations.

As David Blanchett says: failure is really only failure if wealth is depleted while you are still alive, not just over an arbitrarily long time period. Implications of using mortality data directly include:

The argument for using survival probabilities is that for a typical person retiring at age sixty-five, conservatively assuming a remaining lifespan of thirty years or longer will needlessly cause you to underspend.

Dirk Cotton and co-authors studied these competing risks in a 2016 article in the Journal of Personal Finance. They found that retirement could generally be divided into three phases: a low-risk period in early retirement with few portfolio failures and few deaths, a middle period beginning around age eighty in which portfolio failures dominate, and then a late period starting in one’s early to mid-nineties when death becomes more likely than portfolio failure.

In other words, for those whose portfolios survive through the middle part of retirement, it becomes more likely that death will arrive sooner than a late-life portfolio depletion.

The American Academy of Actuaries and the Society of Actuaries prepared theLongevity Illustrator to assist users in developing personalized estimates for their longevity based on a few questions about age, gender, health status, and whether one smokes. This can provide a source of survival probabilities. Exhibit 1 provides these numbers for sixty-five-year old males and females based on their health assessment and smoking status.

Planning Ages for 65-Year Olds from the Actuaries Longevity Illustrator

For instance, their website reports that a sixty-five-year old female nonsmoker in excellent health has a 50% chance of living to ninety and a 10% chance of making it to 101. These numbers are mostly consistent with the Society of Actuaries numbers reported before that provide the mortality data I use.

Meanwhile, a sixty-five-year old female smoker in excellent health has a 50% chance of making it to eighty-four and a 10% chance of living to ninety-seven. Smoking has a significant impact on these longevity statistics. These numbers and more can be found in the exhibit.

In practical terms, most individuals will probably be best served by using fixed time horizons that are sufficiently conservative to reflect their personalized concerns about outliving their wealth. Choosing planning ages for the tenth percentile from the previous exhibit is a reasonable approach for many.

Those who are more concerned about the implications of longevity will wish to assume a longer time horizon and behave more conservatively. This is a more straightforward way to incorporate longevity risk aversion into a retirement income plan. Trying to develop a plan around survival probabilities by age is more complex.

The use of survival probabilities is probably best limited to those working with more mathematical utility models to analyze retirement spending decisions. But the complexities of such models mean their insights are best used to describe potential caveats or adjustments to make to the conclusions derived from the more straightforward approach of using a fixed planning age.

When using survival probabilities, the risk of a long life is mitigated by planning to reduce spending with age to account for the reduced likelihood of living beyond a certain age. The extreme longevity found in the tail of the distribution may also provide more encouragement to consider contractual lifetime income guarantees as a way to manage this longevity risk.

Choosing between fixed horizons and mortality comes down to how averse you are to outliving your wealth, and how much you are willing to reduce spending early in retirement in order to protect against adverse outcomes later. Your appropriate planning age is an extremely personal decision. It also depends on personal health characteristics such as whether you smoke, personal and family health histories, genetic factors, and so on.

What is the appropriate planning age?  It is hard to say and there is no one-size-fits all answer. This requires careful thought about whether it is reasonable to plan for more or less than typical life expectancies. You also need to make a decision about how much you are willing to risk outliving your wealth by choosing a shorter horizon and a higher withdrawal rate.

The next two exhibits try to make the elements of this decision more concrete. First, Exhibit 2 shows the probability of depleting the financial portfolio (based on historical simulations) as each year passes after retirement for different withdrawal rates using a 50/50 asset allocation for large-cap stocks and intermediate-term government bonds.

Failure Probabilities for Length of Time Since Retirement 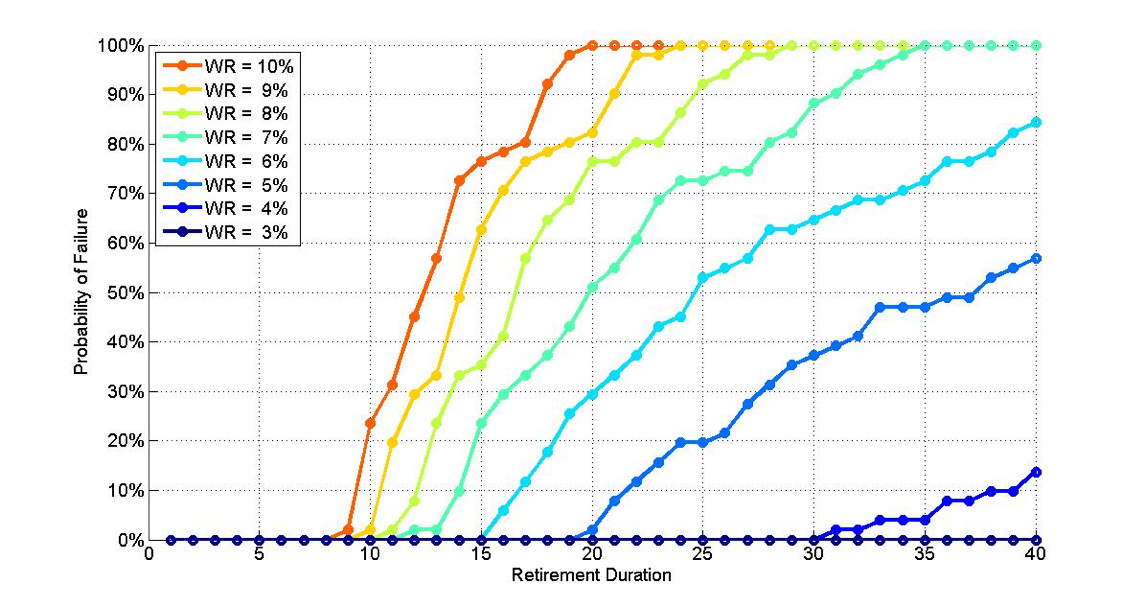 For instance, for a couple using a 10% withdrawal rate, the probability that one member of the couple is still alive by age eighty-three is over 90%, and the probability that wealth is depleted is over 80%. These are poor odds for being able to maintain your lifestyle for as long as you live.

In terms of how to best use the information in this figure, it is a personal decision. You must pick a withdrawal rate with a curve that has not risen too high relative to the survival curve in order to appropriately calibrate your accepted willingness to outlive your assets.

Failure Probabilities for Length of Time Since Retirement

And Survival Probabilities for 65-Year Olds 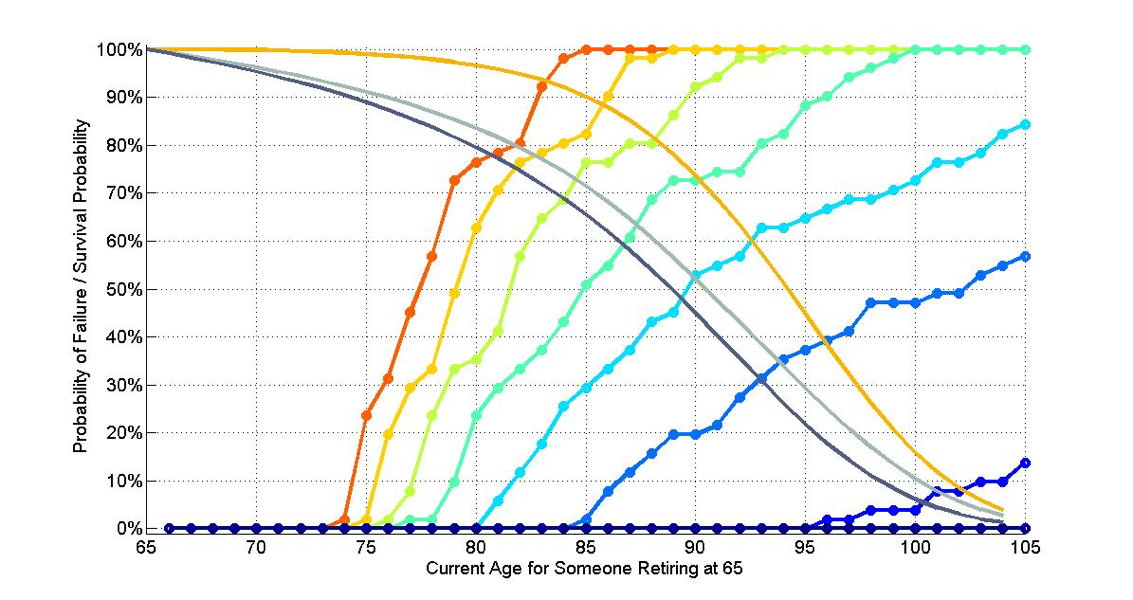