Why Do Economists Say There is an Annuity Puzzle?

Economists are known for describing the annuity puzzle. The puzzle is: why do people not purchase income annuities (exchange a lump sum payment for a guaranteed lifetime income stream) to the extent predicted by economic theory? A number of explanations have been offered. Today I will not get too much into the explanations for the puzzle. Instead, I want to focus carefully on the theory behind why the “annuity puzzle” is said to exist in the first place.

Economists describe the annuity puzzle as a problem of maximizing lifetime expected utility. “Utility” can be off-putting, and I am not going to show any mathematical equations. I will focus on the intuition, and what is essential here is getting a good definition for the value provided by spending. Rather than looking directly at the level of spending, economists look at the value it provides, noting that additional spending provides diminishing increases in value. I reviewed these concepts in “Spending Amounts vs. Spending Value.”

For the basic model as well, there is no investment risk. Financial markets are simplified to one asset which always and forever provides the same return. This return is fixed. For non-annuitized assets, your portfolio of remaining wealth earns this fixed return each year. The annuity provider can also earn this return, and so the annuity payout rate incorporates this return as well as the return of principal.

Of course the assumption of a fixed return is not realistic. But the purpose of building models is to simplify reality in ways that still allow us to make some sense out of reality. By using this simplified assumption about asset returns, we can narrow in on the implications of having an uncertain lifespan.

The annuity provider also provides mortality credits. This gets to the heart of the uncertainty in the model. The uncertainty is longevity risk. The retiree doesn’t know their age of death. However, this is a known unknown, in the words of Donald Rumsfeld. That is, retirees and the annuity provider both know the probability distribution for the age of death, and the probability of survival to each subsequent age past 65. Individuals can’t self-insure to protect from this longevity risk. If they don’t annuitize, they have no chance but to plan for a long lifespan. On the other hand, the annuity provider can pool longevity risk across a large population of customers, and those who die earlier than average subsidize later payments to those who live longer than average. Because the annuity provider can pool the longevity risk, they are able to make payments at a rate much closer to what would be possible when planning for remaining life expectancy, rather than planning for a much longer horizon. Annuities should not be thought of so much as an investment, but rather as insurance to protect against running out of wealth while still alive.

I will assume retirement date wealth of $100. This amount doesn’t impact the results. I assume a male retiree at 65 and use the Social Security Administration 2007 Period Life Tables to obtain survival rates past this age. These survival rates for males can be seen in the following figure. Results will differ by age, gender, and mortality data source, but the basic principles will remain the same. I assume a maximum possible retirement length of 35 years, so no retirees live past 100. This doesn’t have much effect, since the probability of a 65 year old male living past 100 is less than 1%. 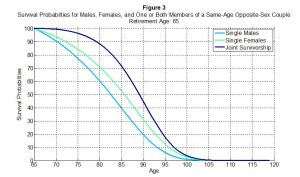 At retirement, retirees choose their annual spending amounts for ages 65-100. Since they know the future investment returns, this is easy to do. They don’t know how long they will live, but they can decide on how much they will spend each year should they still be alive. There are 4 factors which impact the decisions about the future spending path:

2. The investment return: A higher investment return supports a higher annuity payout rate. As well, knowing that your remaining portfolio will grow at a faster rate allows you to spend at a higher rate earlier in retirement, and also pushes you to delay spending to later in order to leave more wealth in your portfolio to grow at the higher rate and allow for more lifetime spending.

3. The retiree’s impatience: A factor which also impacts retirees separate from survival probabilities is how impatient they are to spend. If the discounting to future spending caused by impatience is greater than the future investment return, then retirees have a strong incentive to shift spending to earlier in retirement. Likewise, more patient retirees who can get a larger return than the discounting from their impatience are willing to delay spending so that their wealth can grow more and they can spend more later on.

4. Risk aversion: This is the technical name for a key parameter in the utility function. It describes the shape of the curve which defines the value of spending. Lower numbers imply a less steep curve so that retirees do get more value from spending and have a greater willingness to increase spending at the expense of future reductions. Higher numbers imply that retirees really get hurt by less spending and this overwhelms the additional gains from more spending early on. In the context of retirement and in describing spending in terms of value, I think we should rename risk aversion as spending flexibility. A small number means the retiree is flexible! They can let their spending fluctuate more as the interaction of the other 3 factors warrants. A larger number provides a stronger push toward consumption smoothing, as retirees care less about upside and really wish to maintain as high of spending as possible in worst-case scenarios.

In order to keep this short, I think we can see lots of interesting results by focusing on just one scenario. I will consider the case that investment returns are zero, and the discounting factor for impatience is also zero.

With a real return of zero, the annuity payout rate based on an actuarially fair annuity with this mortality data is 5.66%. That is, the $100 of wealth is used to purchase an annuity at retirement for the 65 year old male, the guaranteed income stream each year for life is $5.66. That happens by pooling the mortality risk across the population.

Meanwhile, for someone who doesn’t buy an annuity, they have to plan for a potential lifespan of 35 years. With a zero return on assets, to smooth consumption across their potential lifetime, they could spend 100/35 = $2.86 each year. Much less than an annuity, but that is because the planning horizon has to be longer to protect against the low probability event of living a long, long time.

Now we get into the really interesting part. Something I’ve been trying to get a dialogue going about is whether the general population is aware of one of the key insights coming from lifecycle finance economic models. That is, you should intentionally plan to decrease spending as you age to account for the lower probability of living to each subsequent age. But how much should you plan to reduce your spending? That depends on your spending flexibility / risk aversion.

There are now two competing tradeoffs: you want to spend the same amount every year for as long as you live to get the most lifetime value from your spending, but you also want to frontload your spending to early retirement when you have the highest chance for survival. Again, I’m assuming a case where investment returns and impatience are both zero and both cancel each other out.

The following figure shows the optimal spending path, both for the case with annuitization and for different degrees of spending flexibility for the case when the retiree does not annuitize. This figure shows why economists see an annuity puzzle: why not annuitize since it provides a higher lifetime spending path?  But beyond this, we can also see how people optimize without annuities. I need to rename something here, because low values imply greater flexibility rather than high values. Someone with flexibility of 1 is quite willing to let their spending decrease over time to reflect the low probability of survival as they age. Spending starts at the same amount as the annuity but declines to very low levels by one’s late 90s. With flexibility of 2, more effort is made toward keeping a smooth level at $2.86. But again, it is still optimal to front load spending. You can also see for coefficients of 5 and 10 how we obtain greater smoothing even in the face of the decreasing survival probabilities. How much lower would you let your spending fall in your 90s to allow more spending in your 60s?  It’s an important and highly personal question!  Personally, I’m sort of attracted to the pattern coming with flexibility=5. 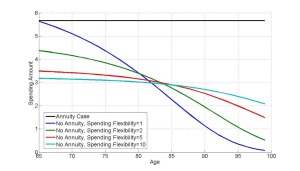 One final part of the puzzle is that economists like to note the “annuity equivalent wealth.” That is, how much additional wealth would you need in order to obtain the same expected lifetime value of your spending when you don’t annuitize as when you do annuitize? Clearly, the value of spending is higher with the annuity since it allows greater spending at all ages. I calculate that with flexibility=1, the retiree needs 53% more wealth to be just as satisfied as with an annuity. The corresponding numbers increase up to the flexibility=10 case, where 90% more wealth is needed to be just as happy. That is a key part of the annuity puzzle: with flexibility of 10, you would need 90% more wealth to have the same utility from not annuitizing as from annuitizing. So why not annuitize?

Well, there are many explanations, and I will revisit those at a later date. Or alternatively, here is your homework assignment, class: List potential explanations in the comments for why the “puzzle” may not really be as puzzling as I just made it sound.