Does The 4% Rule Work Around The World?

An argument in support of the 4% rule is that the post-1926 U.S. historical period included a number of calamitous market events (Great Depression, Great Stagnation of the 1970s, etc.). As such, the argument goes, it is hard to imagine an even more dire situation awaiting future retirees. The historical success of the 4% rule suggests that we can reasonably plan for its continued success in the future.

But from a global perspective, asset returns enjoyed a particularly favorable climate in the twentieth-century United States, and to the extent that the U.S. may experience mean reversion in the twenty-first century, present conceptions of safe withdrawal rates may be unsafe.

Prospective retirees must consider whether they are comfortable basing retirement decisions on the impressive but perhaps anomalous numbers found in historical U.S. data. In planning for retirements in the future, it is unclear whether asset returns of this century will continue to be as favorable as they were in the twentieth century, or whether savers and retirees should plan for something closer to the average international experience.

My first foray into researching personal retirement planning—“An International Perspective on Safe Withdrawal Rates: The Demise of the 4% Rule?” (published in the December 2010 Journal of Financial Planning)—was a study of the sustainability of the 4% rule in other developed-market countries.

In it, I made my calculations using updated data for 1900-2015 now available for twenty developed-market countries plus GDP-weighted world and world ex-US indices. The data is from the Dimson-Marsh-Staunton Global Returns Dataset provided by Ibbotson and Morningstar. 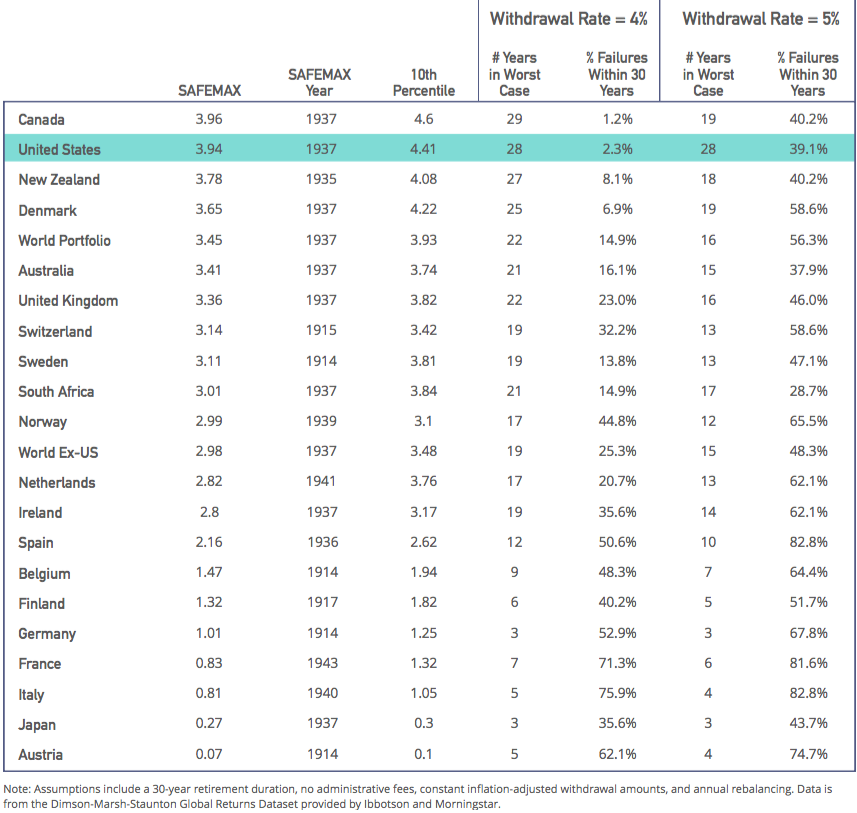 Using the updated dataset through 2015 and the perfect foresight assumption, the calculated SAFEMAX meets or exceeds 4% in Sweden (4.5%), Canada (4.4%), New Zealand (4.1%), Denmark (4.1%), and the United States (4%)—only five of the twenty countries. In seven countries, the perfect foresight assumption yields a SAFEMAX below 2% for hypothetical retirees investing in their local markets.From an international perspective, a 4% withdrawal rate has been problematic. In the original article, to avoid claims of bias that I chose an asset allocation that exaggerated the risk of the 4% rule, I used a rather generous and unrealistic “perfect foresight assumption.” For each country and in each retirement year, I used the asset allocation for local market investors (between stocks, bonds, and bills) that supported the highest withdrawal rate. In many cases, though not all, this meant using 100% stocks.

For bonds, the additional returns over bills failed to compensate for their additional volatility in a retirement income plan, so I will further consider results for the stocks and bills case. Bengen used intermediate-term government bonds—which seem to hold a sweet spot in the tradeoff between returns and volatility—to yield the highest sustainable spending, but this bond option is not available in the Global Returns Dataset.

For what is available, bills work better than long-term bonds for the aforementioned reason of additional volatility. The results for the 50/50 asset allocation can be seen above in Exhibit 1.

In eleven of twenty countries, the SAFEMAX fell below 3%. World War II-era Japan, in particular, faced the sort of crisis suggested by William Bernstein, as the SAFEMAX was only 0.27% for 1937 retirees. The 4% rule would have supported expenditures for only three years.Hyperinflation in Austria led a hypothetical retiree at the start of World War I to only sustain a 0.07% withdrawal rate from their portfolio. Shockingly, the 4% rule would have failed more than half of the time for countries including Spain, Germany, France, Italy, and Austria. Italians attempting to use the 4% rule in their domestic financial markets would have actually faced failure in 76% of the historical periods.

The table also shows results for a 5% withdrawal rate, and failures rates are substantially higher than for 4%. Even if the 4% rule could somehow be deemed safe, there is clearly not much room for error when seeing how quickly failure rates rise for 5% withdrawals. It is somewhat of an understatement to suggest that the results in this table do not portray the 4% rule in a positive light.

As those countries never made the dataset, even the results I describe here include a degree of survivorship bias.

Thus far, the international dataset has revealed sustainable spending rates which fall well below what has been observed with only U.S. historical data. Exhibit 2 provides further insight into how the SAFEMAX is impacted by asset allocation.

For each stock allocation, the perfect foresight assumption is allowed to guide an optimal asset allocation for bonds and bills, which allows for outcomes slightly different than what was seen in Exhibit 1 when only bills were used.

While withdrawal rates were often less, this figure does, nonetheless, support Bengen’s original argument in favor of aggressive asset allocations. For eighteen of the twenty countries, as well as the world and world ex-US, the highest SAFEMAX was obtained with at least 50% stocks. 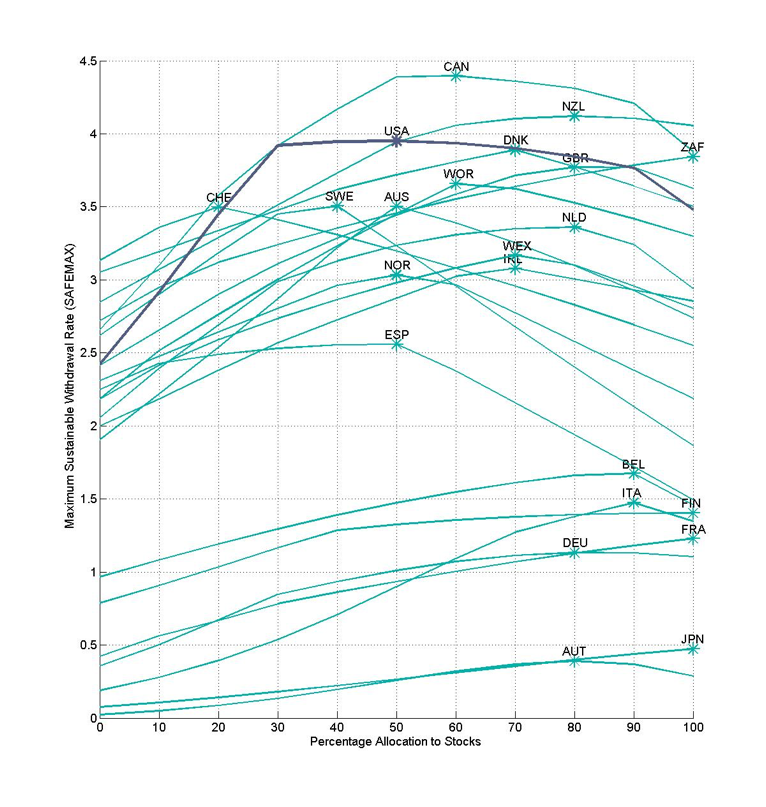 From the perspective of a U.S. retiree, the question is this: Will the future provide the same asset return patterns as in the past, or should Americans expect mean reversion that would lower asset returns to levels more in-line with the experiences of other countries? International readers should keep in mind that the 4% rule is based on U.S. historical data, and mileage has varied quite dramatically for other countries.

It may be tempting to hope that asset returns in the twenty-first century United States will continue to be as spectacular as in the last century, but, as John Bogle cautioned his readers in his 2009 book Enough, “Please, please, please: Don’t count on it.”

Next, read 7 Risks of Retirement Planning.