Navigating One Of The Greatest Risks Of Retirement Income Planning

Retirees face market risk, which concerns how market volatility causes average investment returns to vary over time. Sequence of returns risk—the heightened vulnerability individuals face regarding the realized investment portfolio returns in the years around their retirement date—adds to the uncertainty related to overall investment returns.

The financial market returns experienced near retirement matter a great deal more than most people realize. Even with the same average returns over a long period of time, retiring at the start of a bear market is very dangerous; wealth can be rapidly depleted as withdrawals are made from a diminishing portfolio, leaving little money to benefit from a subsequent market recovery.

Though sequence of returns risk is related to general investment risk and market volatility, it differs from general investment risk. The average market return over a thirty-year period could be quite generous. But if negative returns are experienced when you start spending from your portfolio, you will face an insurmountable hurdle that cannot be overcome even if the market offers higher returns later in retirement.

The dynamics of sequence risk suggest that a prolonged recessionary environment early in retirement could jeopardize the retirement prospects for a particular cohort of retirees. That scenario does not imply a large-scale economic catastrophe. This is a subtle but important point.

Some retirees could experience very poor retirement outcomes relative to those retiring a few years earlier or later. Devastation for one does not necessarily imply overall devastation for the economy or institutions that pool financial market risk across different cohorts.

As I have emphasized, sustainable withdrawal rates fall below what would be expected for average market returns over long periods of time because the ordering of returns matters. Poor early returns followed by strong later returns will still derail a retirement plan. It is worthwhile to further quantify the impact of sequence risk to better illustrate the degree of extra variability it can generate.

First, let us return to a simple example using a fixed return assumption. From 1926 through 2015, the compounded inflation-adjusted return for a 50/50 portfolio of the S&P 500 and Intermediate-Term Government Bonds was 5.08%. Using this as a fixed return assumption for a thirty-year retirement period, the sustainable initial spending rate was 6.56%. Subsequent spending could be adjusted for inflation.

Exhibit 1 shows the glide path for remaining wealth over the thirty-year retirement period. I also show the “current withdrawal rate” over the thirty years, which is worth mentioning as a common misconception about the “4% rule” is that it means you withdraw 4% of what remains each year.

This is not the case for constant withdrawal amount strategies. The initial withdrawal rate is 5.56% in the exhibit, creating a baseline spending of about $6.56 from a $100 initial portfolio. As retirement progresses, the inflation-adjusted withdrawal amount remains at $6.56. But the percentage of the remaining portfolio balance this represents will change as remaining wealth changes. 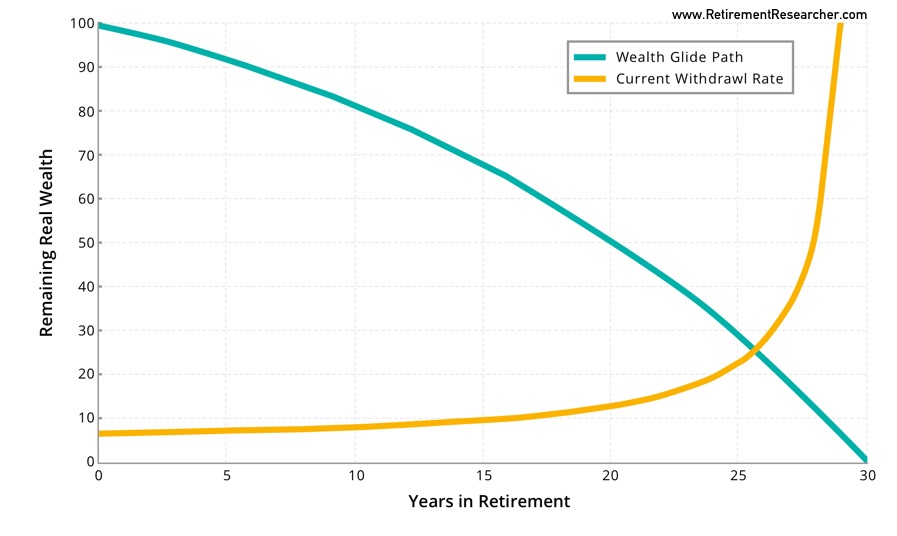 Next , Exhibit 2 provides a way to understand sequence risk by showing the glide path for remaining wealth for a 6.56% initial withdrawal rate and with a 50/50 portfolio for each of the sixty-one rolling historical thirty-year periods since 1926. Historical outcomes vary greatly. 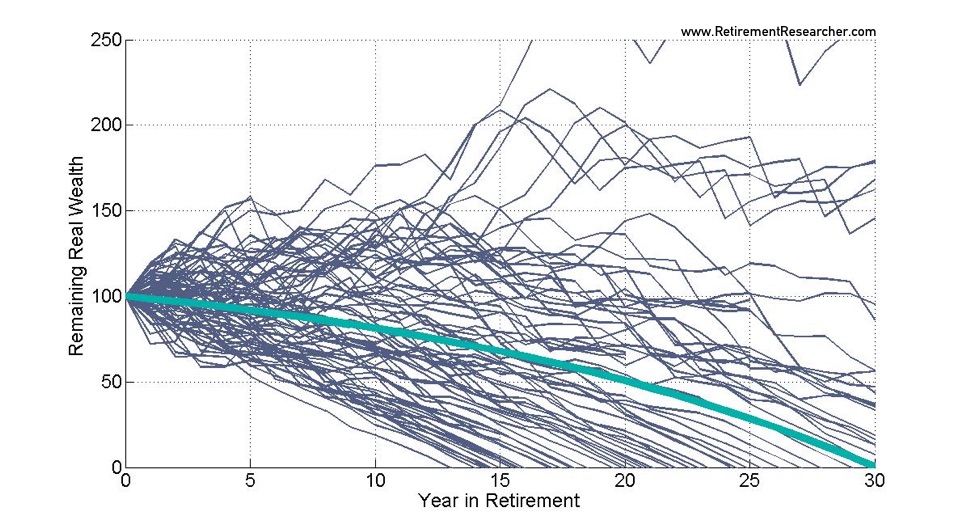 The actual historical outcomes vary greatly for reasons outside the control of these hypothetical retirees. They all use the same retirement withdrawal strategy, but their experiences with that strategy could be good or bad through no fault of their own.

This is the randomness created by sequence risk. Some retirees will be able to spend more aggressively than others based on the market returns they experience in retirement.