There are a massive number of different retirement spending strategies that have been proposed. In the past we have looked at some of the most prominent rules through the lens of simple failure rates. But here, I want to use the PAY Rule™ to calibrate the level of downside risk faced by each of these strategies and see what spending in retirement will look like through time.

In this analysis, we want all of the strategies to have a 10% chance that their real wealth will fall below $15,000 from an initial $100,000 by year 30 of retirement. We’ll further assume that we are using a 50/50 portfolio of stocks and bonds and is based on rolling periods from history. You can see the results in the table below. 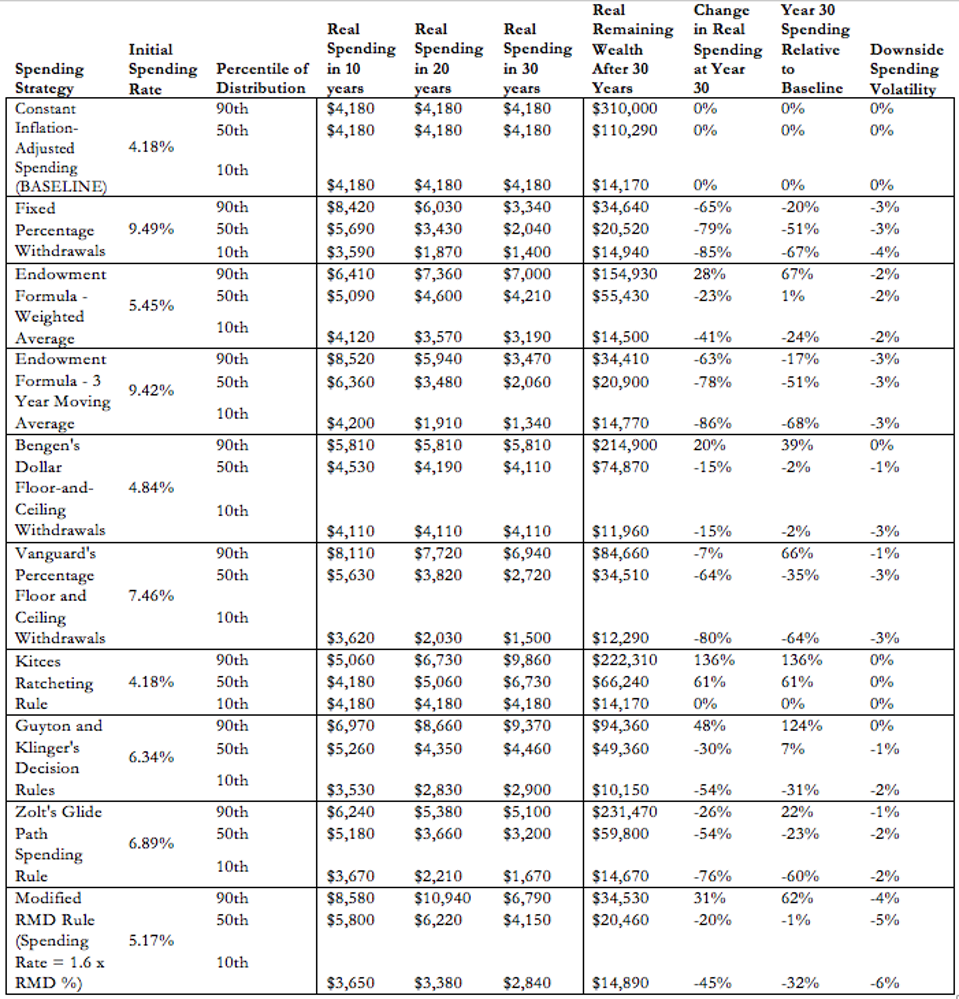 For illustration purposes only. Sustainable spending rates from an investment portfolio comprised of 50% S&P 500 Index and 50% Intermediate Term Government Bonds for a 65 year old couple over 30 years. Using the PAY™ Rule to allow for a 10% chance that real wealth has fallen below $15,000 by year 30. Data period 1926 – 2015. Data retrieved from SBBI. Initial wealth of $100,000. Indices are not available for direct investment.

The first thing to notice (especially since it’s the first row of the table) is that in the constant inflation-adjusted spending, the supported initial spending rate is 4.18%. To be clear, this is higher than the SAFEMAX (the highest initial distribution rate for constant inflation adjusted spending that has worked in all historical periods) value of 4.03%. Again, this is because the PAY Rule™ is not that spending falls to zero with 100% probability by year thirty of retirement, but that there is a 10% chance that wealth falls below $15,000 by year thirty. It is a different criterion. Initial spending can be higher because we allow for a 10% chance that real wealth will fall below a threshold, and some gains from this aspect are partly offset because that wealth threshold is higher than zero.

For constant inflation-adjusted spending, spending stays at this initial level in real terms throughout retirement across the distribution. Remaining wealth after thirty years ranges from just below the $15,000 limit allowed in year thirty at the tenth percentile to as much as $310,000, or three times more than the initial wealth balance, in the ninetieth percentile. In the median outcome, real wealth has grown by about 10%.

For this baseline strategy, spending does not increase or decrease in any of the scenarios as wealth has not been depleted for the circumstances shown in the exhibit. Therefore, changes in real spending, changes in spending relative to the baseline, and downside spending volatility are all zero.

The next strategy in the exhibit is fixed percentage withdrawals. The initial spending rate for this strategy can be 9.49%, which is more than double the constant inflation-adjusted spending strategy. This initial spending level is higher because our focus is on calibrating downside exposure to wealth losses. In this case, the initial spending rate of 9.49% preserves remaining wealth after thirty years at just under $15,000 in the tenth percentile as the PAY Rule™ requires.

Because the initial spending rate is high, there is a tendency for spending to decline with this strategy across the distribution of outcomes. By year thirty, the ninetieth percentile real spending level is only $3,340. At the median, it is $2,040, and at the tenth percentile it is $1,400.

The next strategy is the endowment formula that provides a weighted average in which half of spending evolves with the constant inflation-adjusted strategy and the other half evolves with a fixed percentage withdrawal of the remaining account balance. This strategy is a form of compromise between the two extremes previously discussed. The initial spending rate is 5.45%.

Next, the second endowment formula is based on a three-year moving average. The initial spending rate of 9.42% is just slightly below the initial spending rate with the fixed percentage withdrawals. In practical terms, this strategy behaves similarly to fixed percentage withdrawals but with slightly less volatility. In all cases, spending is reduced throughout retirement due to the high initial spending level. It is 63% less at the ninetieth percentile ranging to 86% less at the tenth percentile. In addition, because of the significant spending reductions over time across the distribution of spending, spending will be less by year thirty of retirement compared to the baseline constant inflation-adjusted spending strategy. The strategy has significant volatility on the downside as well, averaging 3% reductions in spending on a year-by-year basis over the thirty-year retirement period across the distribution of outcomes.

The next strategy is Bengen’s dollar floor-and-ceiling withdrawal strategy. This strategy is based on allowing a ceiling that is 20% higher than the initial withdrawal rate level and a floor that is 15% less than the initial withdrawal level in dollar terms. The initial spending rate is 4.84%. Spending with this strategy is held within the range mentioned. It can reach as high as $5,810, which it does at the ninetieth percentile at subsequent points in retirement. This represents a 20% increase over initial spending. On the downside, spending can drop as low as $4,110, which is 15% below the initial retirement date spending level. By year thirty, spending has fallen to this floor at both the median and tenth percentiles. It is interesting that downside spending is only slightly less than with the constant inflation-adjusted baseline.

Bengen’s dollar floor-and-ceiling rule allows initial spending to increase while also providing the ability to adjust spending in a way that reduces the sequence risk. In this way, even when the floor is reached, spending remains at about the same level as it was with the constant inflation-adjusted baseline strategy.

In this sense, the floor-and-ceiling strategy dominates the constant inflation-adjusted baseline strategy by providing the potential for higher spending throughout retirement. On the downside, it creates circumstances in which spending would be only slightly less than the baseline strategy. By allowing for higher spending, the floor and ceiling strategy ends up reducing the balance of remaining wealth after thirty years of retirement.

The initial spending level is 7.46% and with this strategy, spending also tends to decrease by year thirty across the distribution of outcomes. It is 7% less at the ninetieth percentile, 64% less at the median, and 80% less at the tenth percentile. These are dramatic spending reductions, though they are not as dramatic as with a fixed percentage spending strategy.

Next, we look at the outcomes for the Kitces ratcheting rule. This is a rule that allows for spending increases but not decreases. As such, the initial spending rate is the same as with baseline, and at the tenth percentile of outcomes spending will stay the same. Where this strategy differs is when markets do well. At the ninetieth percentile, real spending increases by 136% after thirty years, and it is 61% higher at the median. There is no downside spending volatility.

The final strategy is the Modified RMD Rule. The PAY Rule™ calibration allows for distribution rates to be 1.6 times that shown in the government’s RMD tables. This provides a 5.17% initial withdrawal rate. After thirty years, real spending grows by 31% at the ninetieth percentile and falls by 20% and 45% at the median and tenth percentile. Relative to the baseline, median spending is quite close to the same, while spending is 62% higher at the top and 32% lower at the bottom. This strategy effectively spends down assets in the same way as the fixed percentage strategy, and it leads to the largest downside spending reductions, which average from 4% to 6%.

As you can see, there are a multitude of possible strategies for withdrawing money from your investment portfolio to meet your retirement income needs. It’s important to remember that none of them are “wrong” (though I would be interested to meet someone who prefers the fixed percentage withdrawals method). What matters is your preferences with regards to the trade offs on offer. Do you prefer a lower, but more steady income stream? Or do you prefer an income stream that is higher, but more volatile? And don’t forget that your investment portfolio is only one of the tools in your retirement income toolbox. It’s important to look at the totality of the puzzle that is your retirement income plan.

Next, read Spending From Investment Portfolios.