How Much Wealth Will You Have 30 Years Into Retirement?

Thus far, we have compared the historical performance of various spending strategies when the initial spending rate is 4%. Over the next couple weeks, we will apply the PAY Rule™ and consider how spending may be impacted by the low-interest-rate environment facing retirees.

But before we do that, let’s look at an exhibit that summarizes spending and wealth outcomes for the rules we just discussed.

Next, read How Much Can I Spend in Retirement?

Exhibit 1 compares 4% initial spending rates for each spending rule using the historical data we just analyzed visually. It shows remaining wealth, direction of spending over time, average spending reductions over time, and how spending evolves over time at different percentiles of the distribution.

It also summarizes and quantifies the previous visuals about how spending and wealth evolved in each of the rolling historical periods.

Considering spending and wealth are both important—as retirees should not be narrowly focused on a singular goal to avoid financial wealth depletion—financial goals for retirement can essentially be reduced to two competing objectives: to support as much spending as feasible, and to maintain a reserve of financial assets to support risk management objectives such as protecting from spending shocks or otherwise provide a legacy.

Three additional spending metrics are included at the right of the exhibit.

In presenting outcomes, each spending strategy is represented by twenty-two numbers. The most important number is not universal, as individual considerations will vary. Retirees will surely wish to consider the implications for when markets do well and when markets do poorly.

Sustainable Spending Rates from an Investment Portfolio over 30 years 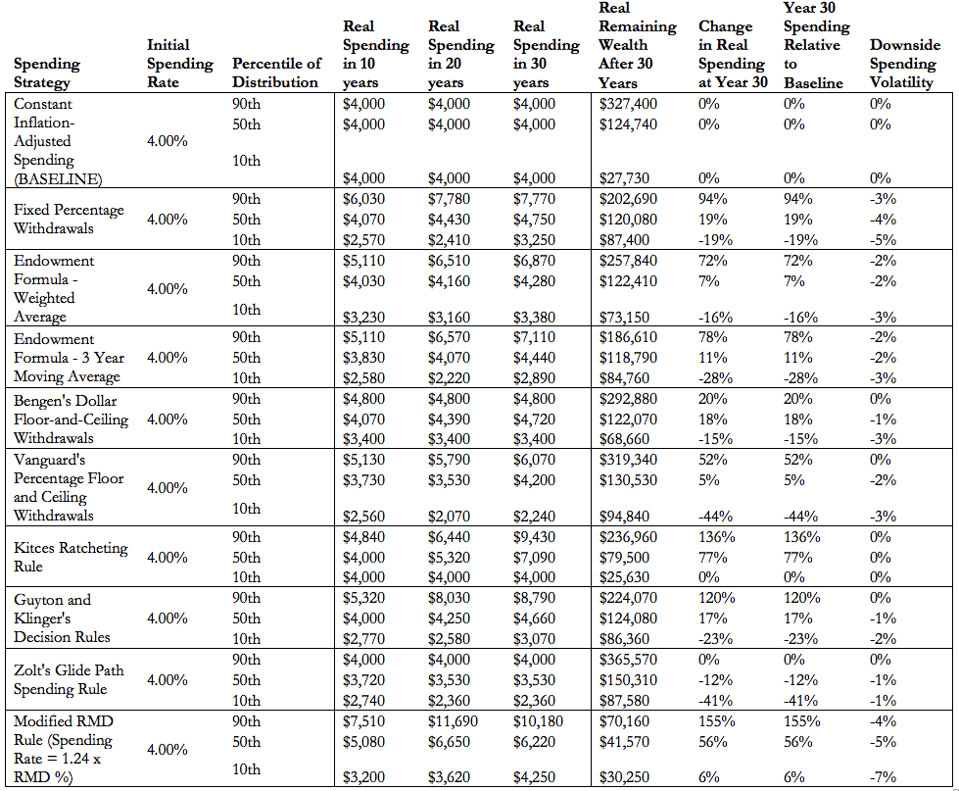 As you can see, the constant inflation-adjusted spending rule creates the smallest range for spending adjustments and the largest range for remaining wealth after thirty years. From a retirement date portfolio of $100,000, spending remains constant across the distribution over time at $4,000.

The range of remaining wealth after thirty years is $27,730 at the tenth percentile and $327,400 at the ninetieth percentile. At the median, wealth has grown to $124,740 in real terms. If spending stays constant and this is the baseline strategy, the remaining measures about the direction of spending, spending relative to the baseline, and spending volatility are all 0%.

As for other strategies, we can discuss them in terms of the trends for each of the measures. Regarding how spending evolves over time, spending can reach the highest levels at the ninetieth percentile with the modified RMD rule, the Kitces ratcheting rule, Guyton and Klinger’s decision rules, and the fixed percentage rule.

As for the median level of spending after thirty years, spending is the highest with the Kitces ratcheting rule, the modified RMD rule, and the fixed percentage rule. At the tenth percentile, spending after thirty years is the highest with the modified RMD rule, constant inflation-adjusted spending, and the Kitces ratcheting rule.

The Vanguard floor and ceiling and Zolt glide path rules lead to the lowest levels of spending after thirty years.

For remaining wealth after thirty years, it is the highest at the ninetieth percentile for constant inflation-adjusted spending and Zolt’s glide path rule. These rules do not allow for any spending increases in retirement, even when markets do well, which allows for more remaining wealth when initial withdrawal rates are the same.

The modified RMD rule, which increases the withdrawal rate over time to match declining longevity, is the most efficient at spending down assets over retirement. It is the only rule with a decline in remaining real wealth at the ninetieth percentile.

In terms of changes in spending at the ninetieth percentile, the modified RMD rule provided the largest spending increase. This was followed by the ratcheting rule and the Guyton and Klinger decision rules. Meanwhile, at the median, the ratcheting rule offered the largest spending increase of 77% after thirty years. This was followed by the modified RMD rules.

The next column (Year 30 Spending Relative to Baseline) shows the year thirty spending for a strategy relative to the initial spending from the baseline constant inflation-adjusted spending strategy.

The fixed percentage withdrawal strategy is next on the list of those with the most downside spending volatility. Other strategies with noticeable downside volatility include the two endowment formula strategies and the Vanguard floor and ceiling percentages strategy.

Since wealth was never depleted in this exhibit, the constant inflation-adjusted strategy and the ratcheting strategy are the only two that never experienced any downside volatility. Neither of these strategies experiences a spending decrease unless the portfolio becomes depleted.

Next time, we’ll discuss the impact of different market environments on these spending strategies.