Should You Plan On Your Retirement Lasting 30 Years Or 40?

The 4% rule has a planning horizon of thirty years. As I mentioned during the discussion of the PMT formula, different time horizons suggest different spending rates. An eighty-five-year old is not necessarily limited to a 4% spending rate.

The 4% rule gets its name from its suggested spending rate for the first year of retirement. Beyond that, the spending rate evolves as inflation guides future spending and portfolio returns guide the amount of remaining financial assets.

How long will your retirement last? The impossibility of answering this question with any long-term accuracy is one of the key challenges of planning a retirement income strategy.

The nature of longevity risk is that we know our life expectancy, but it is based on an average with a great deal of variability. Two general approaches exist to deal with this unknown element of longevity:

Planning for a specific retirement time horizon begins by selecting a horizon you are unlikely to outlive, and then developing a plan that covers the entire time. The horizon should be greater than life expectancy, as retirees have a 50% chance of living longer.

Even sixty-five-year olds may wish to plan for different retirement durations depending on how conservative they wish to be with their choice and how fearful they are of outliving their investment portfolio. A sixty-five-year old planning to live to 100 or 105 would need to plan for a thirty-five or forty-year horizon, respectively.

Writing in Harold Evensky and Deena Katz’s Retirement Income Redesigned, Bob Curtis makes a convincing case for fixed horizons. He argues that longevity is not a “probability problem” but a “possibility problem,” adding:

“What possible sense does it make to tell your client that she can spend more money now because you’re assuming in some of the Monte Carlo iterations that she’ll die early? How does a person die ‘some of the time?’”

It is a good question. But at the same time, does it make sense to lower spending now so you can plan to spend just as much at 100 as at age sixty-five, despite the low chance of living to 100? Yes and no are both acceptable answers to this question, as it truly depends on your unique preferences regarding these tradeoffs.

Planning for a longer horizon by spreading out distributions from your portfolio is the conservative approach. (Traditional safe withdrawal rate studies ignore this risk entirely, focusing solely on minimizing failure.). You will have to spend less and will most likely leave a larger than planned bequest.

On the other hand, planning for a shorter horizon could leave you exposed to overspending, which means you could outlive your wealth. For some, the risk of cutting spending and missing out on enjoying hard-earned wealth outweighs the risk of overspending.

The impact of this risk varies from person to person depending on the value each would get from additional spending.

We can learn more about the role of retirement duration on sustainable withdrawal rates in Exhibit 1.

Using the historical data since 1926 and all of the baseline assumptions—including a 50/50 allocation to large-capitalization stocks and intermediate-term government bonds—this exhibit shows William Bengen’s SAFEMAX withdrawal rate for retirement horizons between five and forty years. We saw before that the SAFEMAX for a thirty-year retirement is 4.03%.

This exhibit illustrates a curve in which the SAFEMAX declines, but at a decreasing rate, as the retirement duration increases. The historical SAFEMAX for forty years reduces to 3.72%. 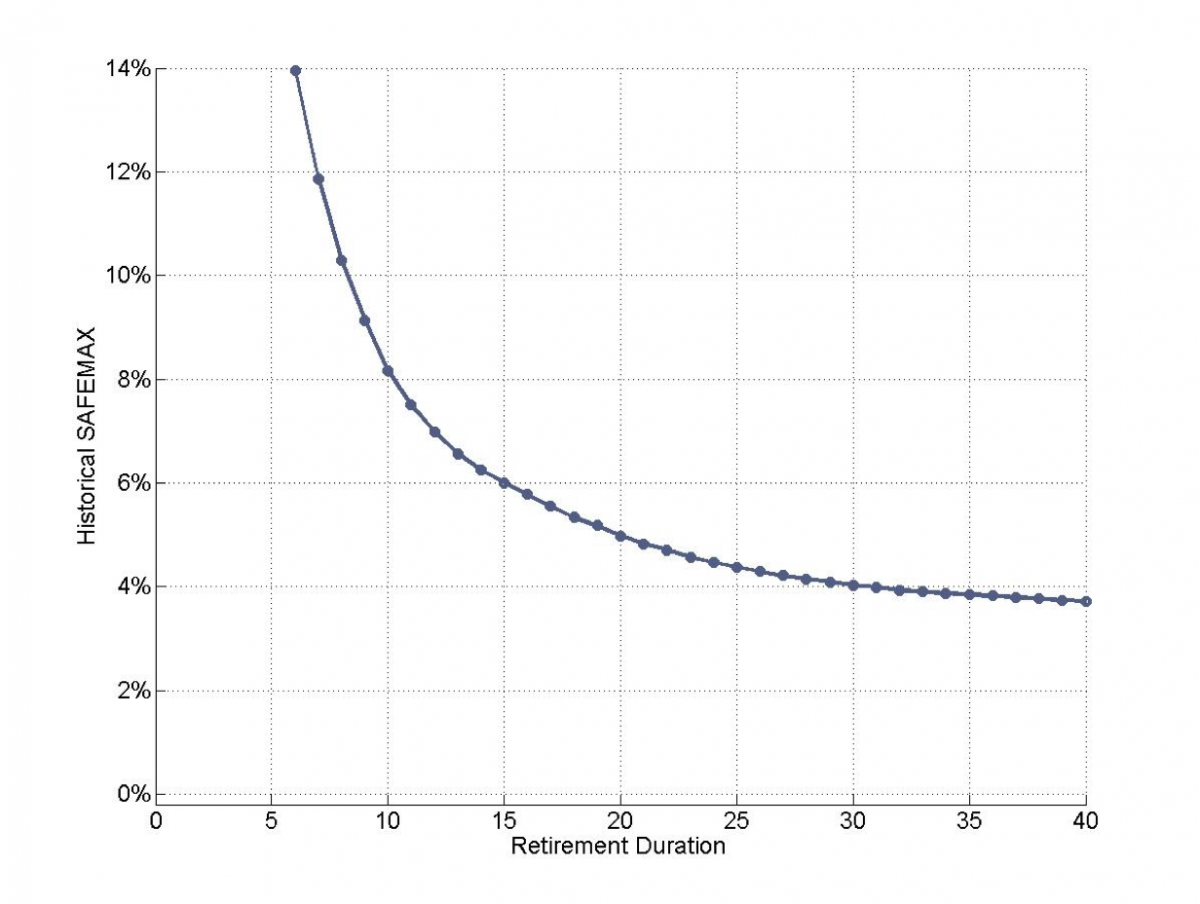