Safe Savings Rates: A New Approach to Retirement Planning over the Lifecycle

“Safe Savings Rates: A New Approach to Retirement Planning over the Life Cycle.” (As featured in The Economist)

This article is in the May 2011 issue of the Journal of Financial Planning.  Should that link stop working, a draft version of the paper can be downloaded from RePEc.

On the retirement side, research is mostly about finding a “safe withdrawal rate,” which is then used to compute a “wealth accumulation target” so that desired retirement spending can be funded from this wealth at the desired withdrawal rate.

Next, read Safety-First Retirement Planning: An Integrated Approach for a Worry-Free Retirement.

I’ve not seen much that links the accumulation and decumulation  phases together in an integrated whole. I’ve had an entry on my research to-do list for a while to explore what happens when this link is made.  I assumed the results would be a minor extension of the existing literature, so I held off looking at it for a long time.

But when I recently took a closer look at this issue, I was excited by the results and quickly refocused my efforts to make this a top priority.
My findings suggest that a fundamental rethink about retirement planning is needed. When linking the pre- and post-retirement phases together, the concepts of “safe withdrawal rates” and “wealth accumulation targets” end up serving as almost an afterthought.  Focusing on them is the wrong way to think about retirement planning.

So what really matters instead is the “safe savings rate,” which is the maximum of all the minimum necessary savings rates from overlapping historical periods needed to build up enough wealth so that you can afford your desired retirement expenses. Put another way, someone saving at her “safe savings rate” will likely be able to achieve her retirement spending goals regardless of her actual wealth accumulation and withdrawal rate. The safe savings rates derived in this manner is less volatile than historical maximum sustainable withdrawal rates, and it implies a lower ex-post cost to having been overly conservative.

Unlike the 4 percent rule, there is not a universal “safe savings rate,” but guidelines can be created. Table 1 in the paper makes a starting effort to do this, considering some cases beyond my baseline scenario. What is clear is that starting to save early and consistently for retirement at a reasonable savings rate will provide the best chance to meet retirement expenditure goals. You don’t have to worry so much about actual wealth accumulation and actual withdrawal rates, as they vary so much over time anyway. But the savings plan should be adhered to regardless of whether it seems one is accumulating either more or less wealth than is needed based on traditional criteria.

As well, worrying about the “safe withdrawal rate” and a “wealth accumulation target” is distracting and potentially harmful for those engaged in the retirement planning process. Recent Americans may have not saved enough or retired early because an outstanding market performance may have brought them to their traditional wealth accumulation goals earlier than expected. At the same time, someone saving during a bear market who is nowhere near reaching a traditional wealth accumulation goal may have given up saving or needlessly delayed their retirement, when it is precisely such individuals who could have enjoyed higher withdrawal rates.

Briefly, the methodology involves integrating the working and retirement phases to determine the savings rate needed to finance the planned retirement expenditures for rolling 60-year periods from the data. The baseline individual wishes to withdraw an inflation-adjusted 50 percent of her final salary from her investment portfolio at the beginning of each year for a 30-year retirement period. Prior to retiring, she earns a constant real salary over 30 working years, and her objective is to determine the minimum necessary savings rate to be able to finance her desired retirement expenditures. Her asset allocation during the entire 60-year period is 60/40 for stocks and bills. Data is from Robert Shiller’s webpage for the S&P 500 and Treasury bills.

To see the basic story, note in Figure 1 that historical maximum sustainable withdrawal rates (MWRs) for 30 years of inflation-adjusted withdrawals with a 60/40 asset allocation have historically exhibited significant volatility. 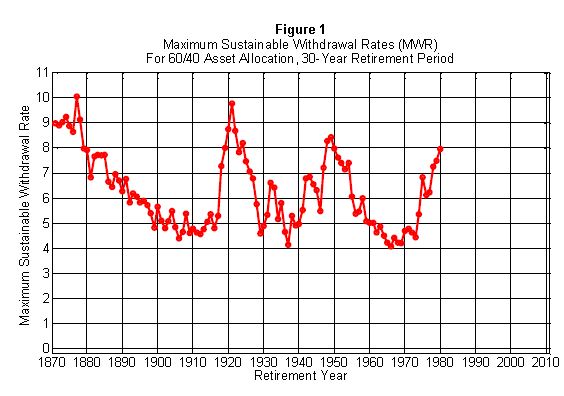 Regarding the volatility of MWRs, Figure 2 shows a very close relationship in which the MWR tends to fall after a year with high real portfolio returns and rise after negative returns. 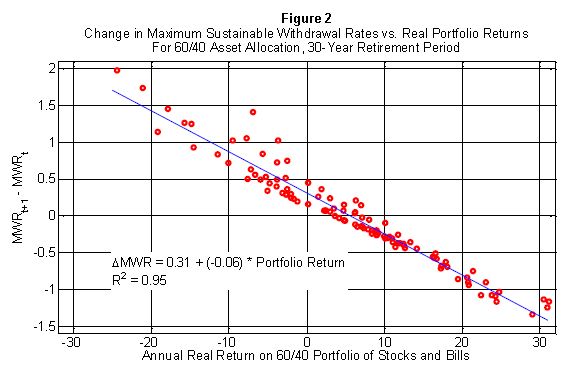 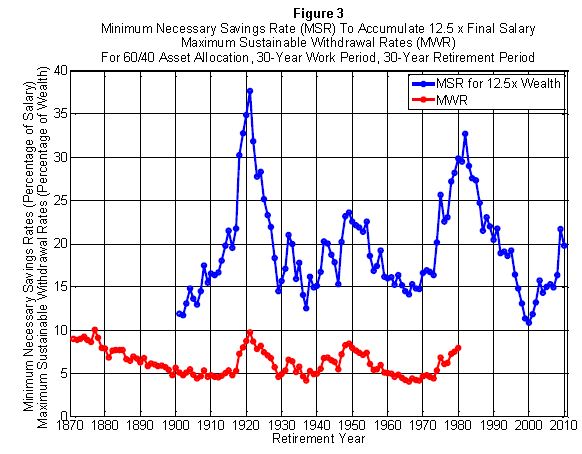 But what is also fascinating and important to note is how the pattern of these minimum necessary savings rates (MSRs) closely follows that of the corresponding maximum sustainable withdrawal rates (MWRs).  Figure 4 shows more about that relationship. 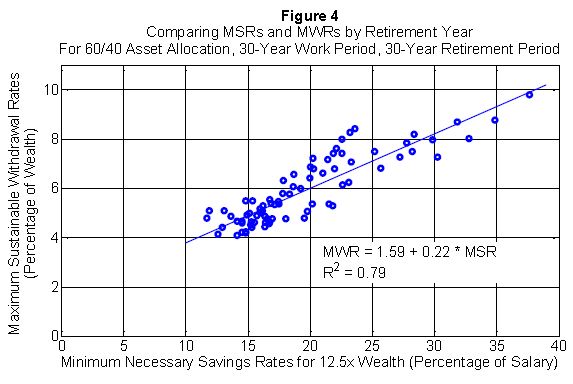 Next, Figure 5 provides the main results, showing both the savings rate needed to accumulate 12.5 times final salary (this is the MSR described above) and the lifecycle-based minimum savings rate needed to finance her desired expenditures (LMSR). The black LMSR curve is the main contribution of this paper. In the context of Bengen’s original study, the maximum value of the LMSR curve (which is 16.62 percent in 1918) becomes the SAFEMIN savings rate from a lifetime perspective that corresponds to Bengen’s SAFEMAX withdrawal rate. Had the baseline individual used a fixed 16.62 percent savings rate, she would have always saved enough to finance her desired retirement expenses, having barely accomplished this in the worst-case retirement year of 1918. 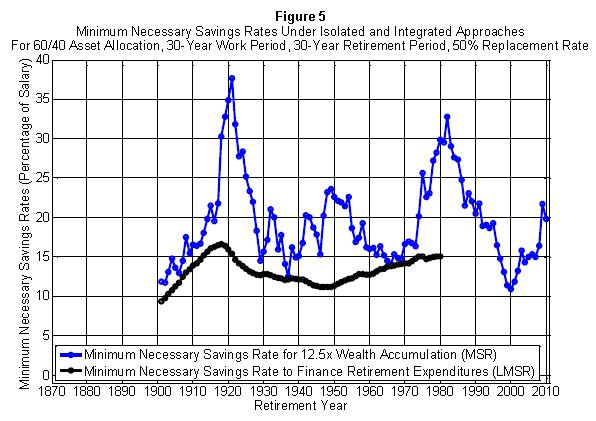 Retirement planning in the context of the LMSR curve is less prone to making large sacrifices in order to follow a conservative strategy. In the context of safe withdrawal rates, if someone used a 4 percent withdrawal rate at a time that would have supported an 8 percent withdrawal rate, she is sacrificing 50 percent of her potential retirement spending power. But in the context of safe savings rates, if someone saved at a rate of 16.62 percent at a time when she only needed to save 9.34 percent (this is the lowest LMSR value, occurring for the 1901 retiree), she is sacrificing only a little over 7 percent of her annual salary as surplus savings. 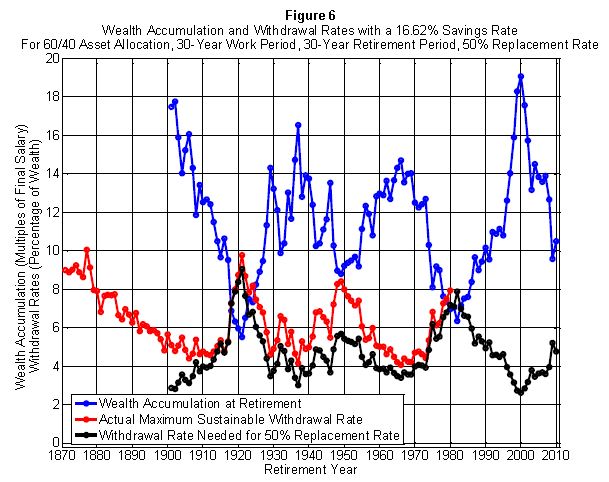 I think this paper may provide a new starting point for thinking about retirement planning from an integrated lifetime perspective. I invite your comments and criticisms.  There are more details in the complete paper than I have covered here, so please feel free to check it as well.

Update: This blog post is meant only as an extended summary of the paper contents.  It doesn’t include all the details, just the highlights.  But I’ve noticed that I missed mentioning two rather important details.  They are:

1. Of course a caveat must be included that the “safe savings rate” is merely what has been shown to work in rolling periods from the historical data. The same caveat applies to the “safe withdrawal rate” as well, as in the future we might experience a situation in which the safe savings rate must be revised upward or the safe withdrawal rate downward. “Future” here actually means post-1980, because I cannot calculate the 30-year MWRs for people who retired since 1980.

2. It must also be clear that the findings about safe savings rates in this study are not one-size-fits-all. The study merely illustrates the principles at work by focusing on the case of a particular stylized individual. Real individuals will vary in their income and savings patterns, consumption smoothing needs, desired retirement expenditures, and asset allocation choices. Individuals will still need to determine their own “safe savings rate” in consideration of these factors, and the paper provides a framework to accomplish this task.

Update:  In June 2011, I completed a follow-up study which considers how to use this approach for people already in mid-career thinking about when they might be able to retire.  The new article also emphasizes how hard it really is to know if one is on track to meeting a wealth accumulation target by a given date. Read about it here. The new study is scheduled to be published in the October 2011 Journal of Financial Planning.

Also, I’d like to thank the following websites for providing links  or discussions about this article:Tannery & Company Wealth Management, “Market Volatility and Retirement Income: Reshift Your Focus”

Philip Coggan’s “Save more today and tomorrow” at Pensions Insight

Nathan Collier’s “Who Controls Your Future?” at his NCSBLOG

Jake Mason’s “How Much do I Need to Save…?” at the Pinnacle Advisory Group

The Economist, “The wrong number: People should focus on their savings, not withdrawals” July 21, 2011 (from the print edition)

Dan Moisand’s “Is There a Safe Savings Rate?” in Financial Advisor July 2011 issue

Matt Yglesias’s blog at ThinkProgress.org“How Much Can I Afford to Spend in Retirement” site

The Motley Fool Discussion Board

I do welcome your comments here, there, or anywhere (I’ve been reading “Green Eggs and Ham” to my son), and please feel free to use my contact form if you would like to contact me directly.