I apologize for borrowing the post title from Mike Piper’s Oblivious Investor Blog, but I can’t come up with any better name.  I see that this topic of combining safe withdrawal rates with life expectancies is pretty popular. Just a reminder, I certainly did not come up with the idea myself (I’ve mentioned before that Moshe Milevsky from York University is Toronto is probably the best known name connected to this, and I also reviewed an excellent paper on this topic by the Blanchett twins). However, while walking to work this morning, I thought of a different way to present the data that could be interesting for people planning for retirement.Let’s tell a little story…

First, assuming a retirement age of 65 and using mortality data from the 2007 Social Security Administration Period Life Tables, we can see the probability of survival to each age past 65 for a single male, a single female, and at least one member of a same-age opposite-sex couple: 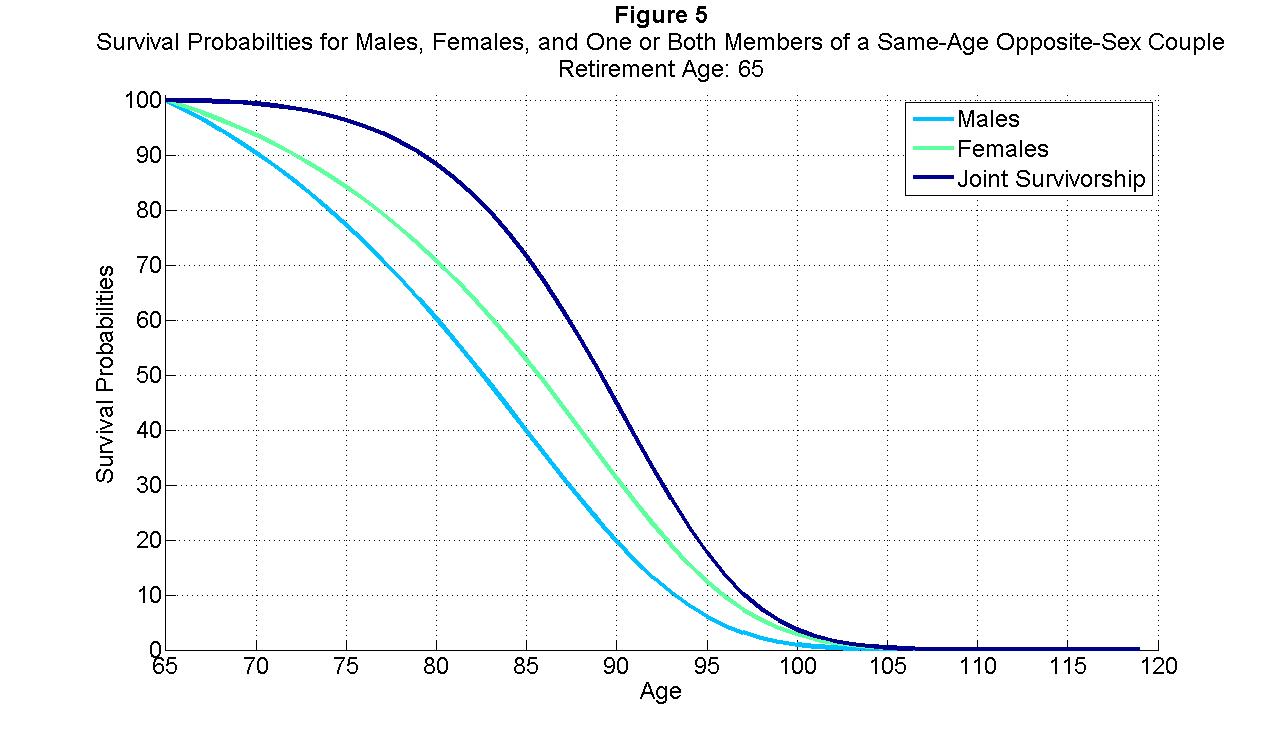 Females tend to live longer than males, and naturally the joint lifespan of a couple is longer than either members separately.  The longer one may expect to live, the higher will be the failure rates one should expect using a particular withdrawal rate and asset allocation in retirement.  This is illustrated in the following three figures, which show the failure rates for males, females, and a couple. These are the chances the retirees will experience not having any remaining wealth at some point while they are still alive. These figures are based on Monte Carlo simulations for stock and bond returns, assuming that future returns will follow the same behavior as in the past (1926-2010) with large-capitalization stocks and intermediate-term government bonds. 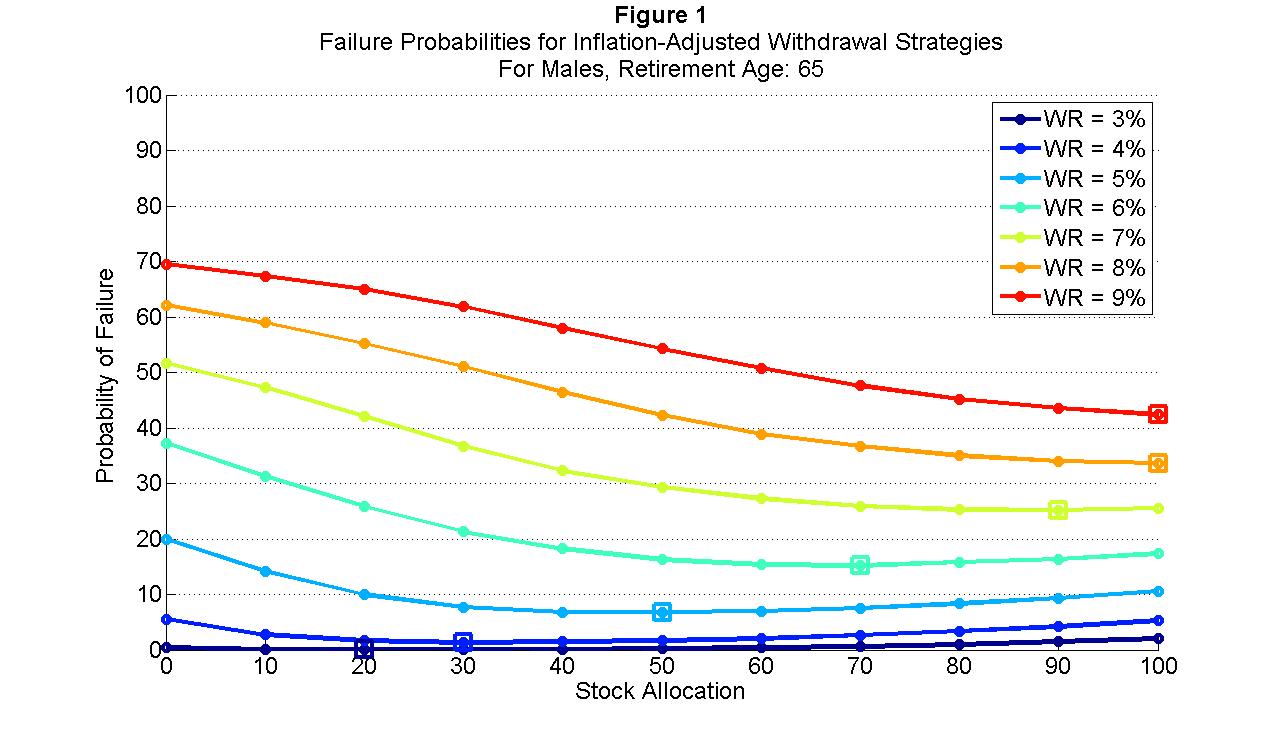 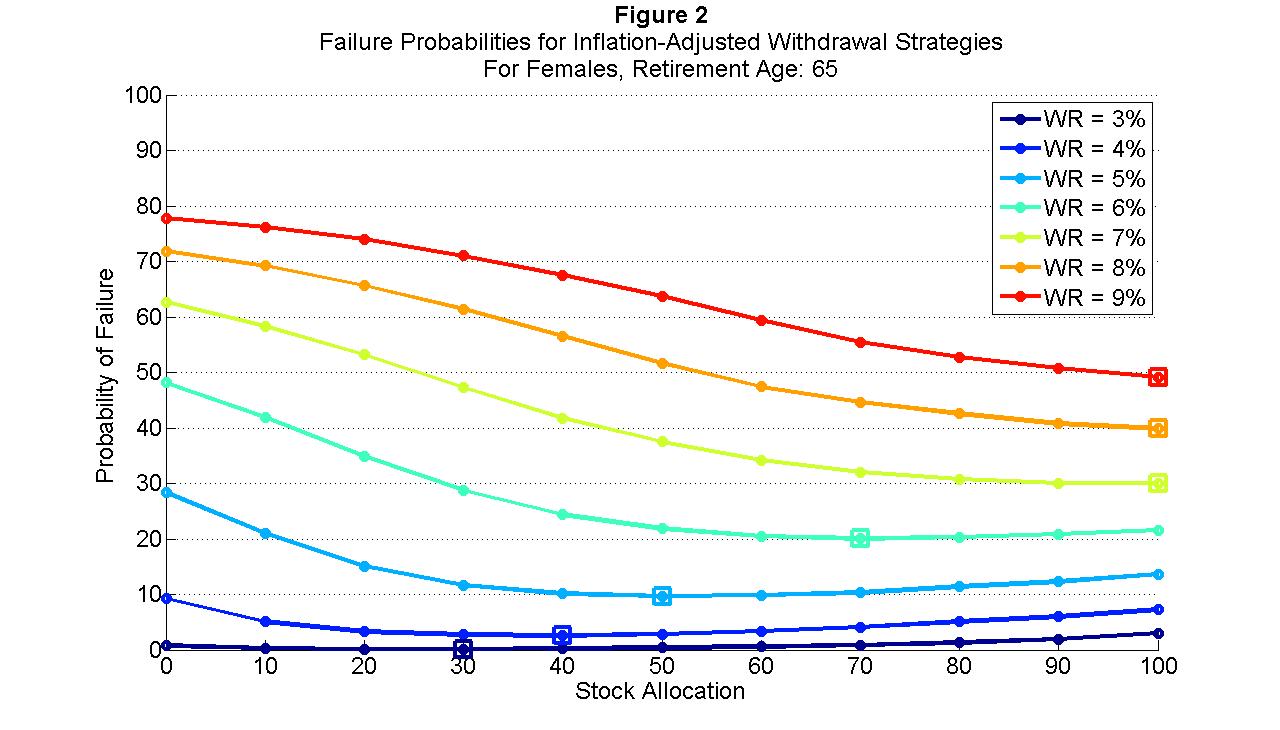 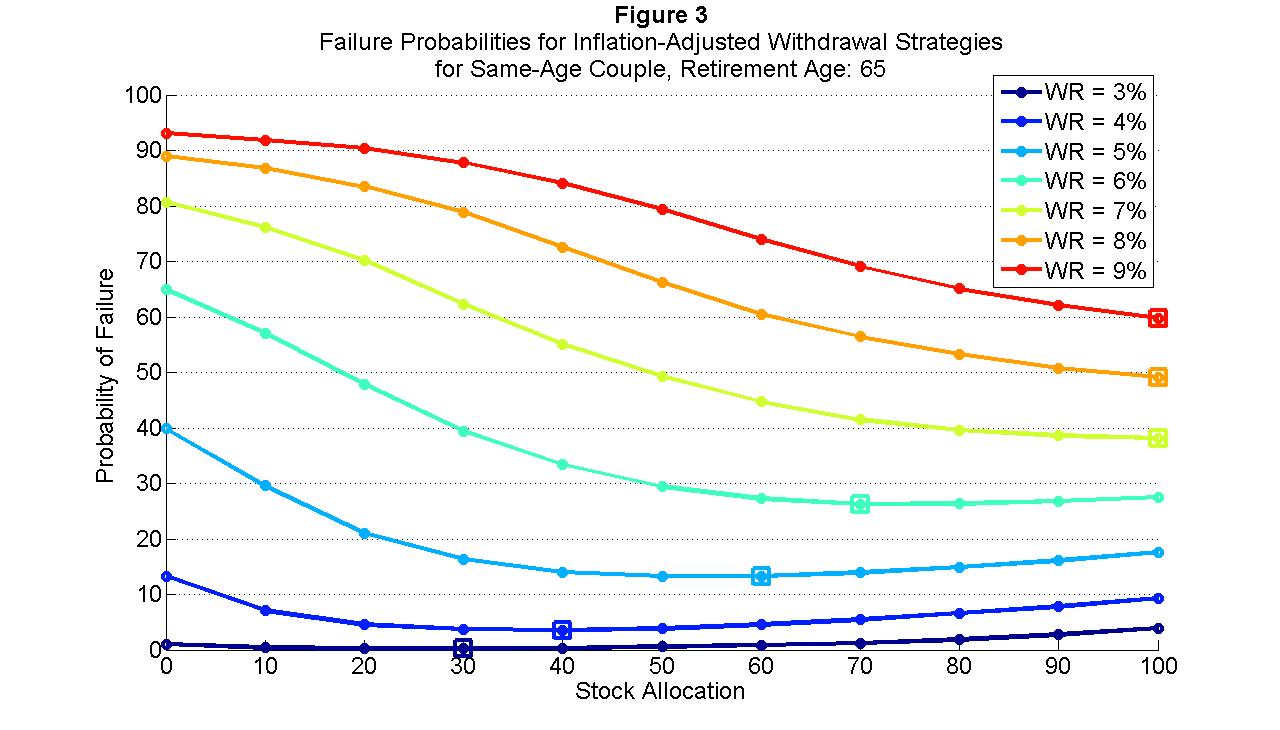 But now, let’s look at this in a slightly different way.  This is what I thought of while walking to work. The following figure doesn’t apply any survival probabilities.  It just shows the chance of running out of wealth as each year passes after retirement. This is for different withdrawal rates. I need to choose an asset allocation for this figure, and these results are shown for a 40% stocks / 60% bonds portfolio, which I think is somewhat reasonable for retirees. 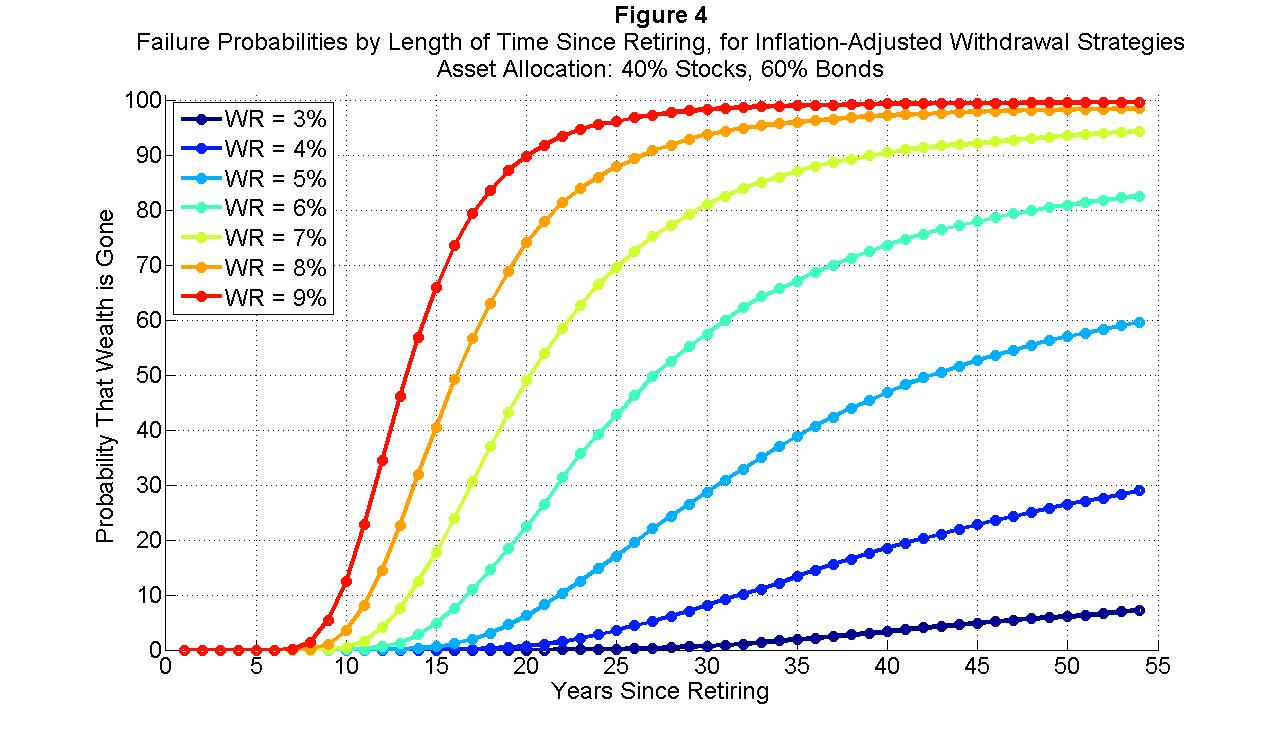 The previous figures before this one were really just applying survival probabilities to the numbers in this Figure 4 in order to get the failure rates.

The final figure below breaks the steps down so that you can play around with it for yourself.  This last figure just combines Figure 4 with the survival rates shown in the first figure above (which I called Figure 5). The cross-over points don’t have any particular meaning, but just to consider one case, look at where the survival probability for a couple crosses the failure rate probability for the 9% withdrawal rate. Where this cross-over occurs, there is a more than 80% chance that at least one member of the couple will still be alive, and there is a more than 80% chance that no wealth is left.  Not good odds.  For any particular age, the higher both sets of curves are, the higher are the chances of still being alive and the higher are the changes of not having any wealth left.  I think this figure is nice to see some overall odds about outliving your wealth. 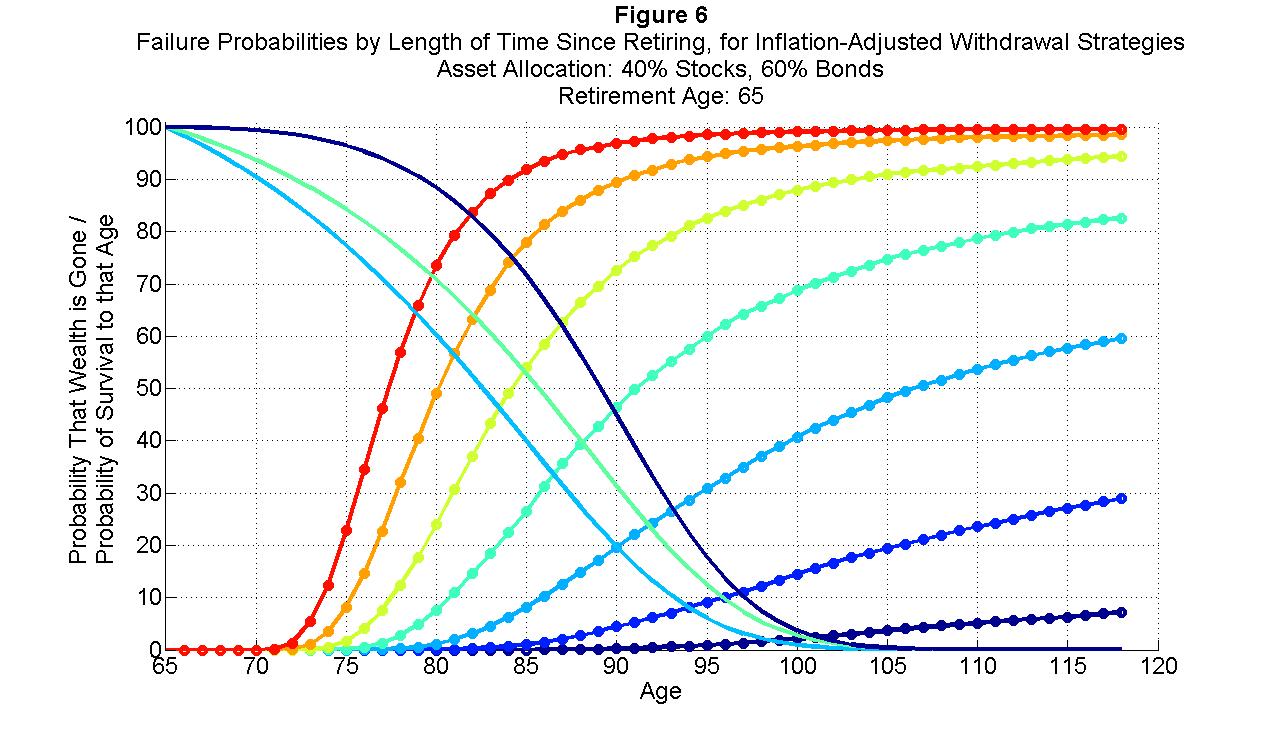 Next, read 7 Risks of Retirement Planning.