Should You Use a Rising Equity Glide Path in Retirement?

Today, we will begin a discussion of three approaches to reducing portfolio volatility for retirees by studying the viability of rising equity glide paths.

A common assumption for withdrawal rate studies is that the asset allocation remains fixed throughout retirement and is rebalanced to the targeted allocation every year.

For this discussion, we will relax the assumption that retirees maintain the same fixed asset allocation throughout their retirements. Instead, we will remain firmly within the realm of total-return investing.

Changing asset allocation over retirement within the context of a total-return investment portfolio can be understood as an attempt to reduce portfolio volatility at key points in retirement in order to reduce the retiree’s exposure to sequence of returns risk.

Even if the average market return is decent, retirees are especially vulnerable to the impact of bad market returns in early retirement. Sequence risk is uniquely caused by the attempt to spend a constant amount each year from a volatile investment portfolio. Sequence risk can be dampened by either letting spending fluctuate or by reducing portfolio volatility. For now, we’ll focus on reducing volatility.

Outside of just using a low-equity allocation throughout retirement (which comes with its own sets of risks in terms of being unable to support a spending goal beyond the bond yield curve), we can identify three major ways to reduce portfolio volatility when it counts the most. These methods have three goals:

I will address the first approach today and the others next week.

First, rising equity glide paths for retirement aim to reduce portfolio volatility in the pivotal years near retirement when a retiree is most vulnerable to losing the most dollars of wealth with a given market drop.

This discussion is based on an article I wrote with Michael Kitces titled, “Reducing Retirement Risk with a Rising Equity Glide Path.” People are most vulnerable and have the most at stake when their wealth is largest, which generally happens around retirement.

The suggested lifetime stock allocation path thus becomes U-shaped: stock holdings are higher when young, at their lowest around the retirement date, and higher again later in retirement. Exhibit 1 illustrates this general pattern. 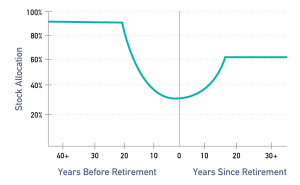 The idea of a rising equity glide path in retirement is counterintuitive as conventional wisdom says that stock allocation should decline with age.

To understand the concept of rising equity glide paths, it is worthwhile to consider four general economic environments retirees may face.

First, financial markets may do well throughout the entire retirement period. In this case, retirement should be successful regardless of asset allocation strategy, though more aggressive strategies will support a larger legacy.

Next, the entire retirement may be confronted by poor market returns. In this case, no allocation strategy can save retirement. A rising stock allocation would at least fair better than a more aggressive asset allocation throughout.

Third, financial markets may perform well in early retirement but poorly later in retirement. In this case, sequence risk will not manifest and the sustainable withdrawal rate will be high. Rising equity glide paths will work, but they may leave less legacy than otherwise.

Finally, the rising stock glide path excels in scenarios that have historically led to the worst outcomes for retirees. That is, markets fare poorly early in retirement and then recover later in retirement. These scenarios have created the lowest withdrawal rates for past retirees, and this is where a rising equity glide path can make a difference in supporting better retirement outcomes.

While the rising equity glide path idea is meant as a risk management technique, there are obvious real world implications that may limit its usefulness.

Primarily, it may be that as people age, it becomes increasingly difficult to stay the course in response to market volatility, and retirees who have experienced a period in early retirement where they dealt with less volatility may not be prepared to deal with volatility again late in life.

Perhaps the best implication from research along these lines is to at least not think about continuing to reduce stock allocations throughout retirement, and also that it may be okay to start retirement with a lower stock allocation than the traditional withdrawal rate studies suggest.

Next, read How Much Can I Spend in Retirement?